So if you're on the discord you already know about this, but I'm trying to document the Saturn version of NBA Jam Tournament Edition so that we can edit it like people have done with the SNES and PSX versions. There are a lot of similarities between the PSX version and the Saturn version but a lot of differences as well, especially in file names.

I have already figured out a lot in a short amount of time, thanks mostly to Mattrizzle and eskayelle / Double Z's documentation of the Playstation version.
The major things left to sort out are getting the exact palette for the heads out. I tried saving the VDP2 CRAM and using CRAM2PAL and that spits out what *LOOKS* like the correct palette but its not after editing sprites.
I used this as a base:

then made some changes and there were really dark spots and stuff, so I just need to figure out why, or have someone smarter than me help. 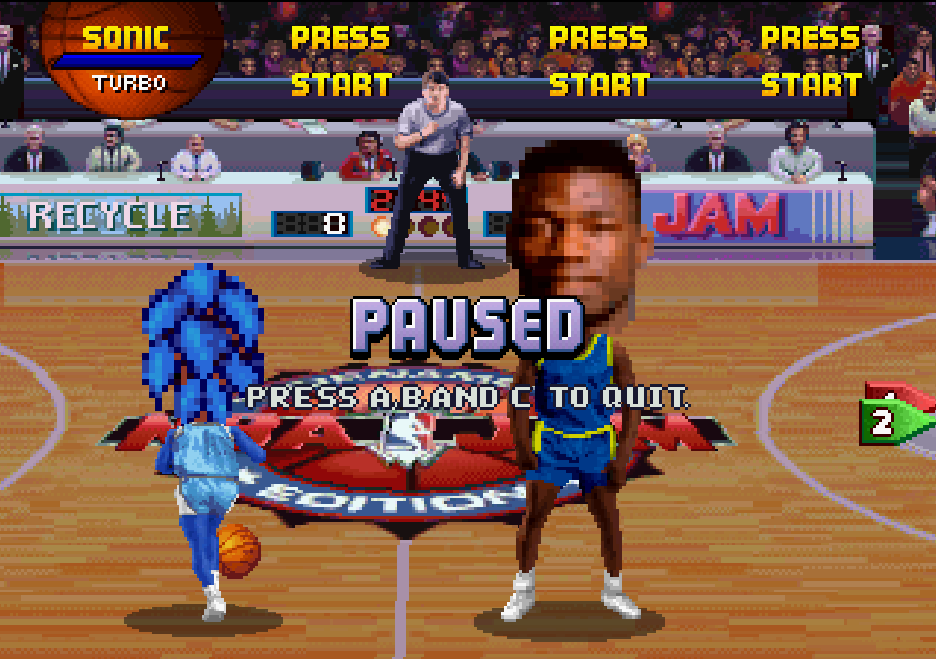 Those brown dots are a dark blue in the head sprite data.

I used HUGE head mode to magnify the ugly: 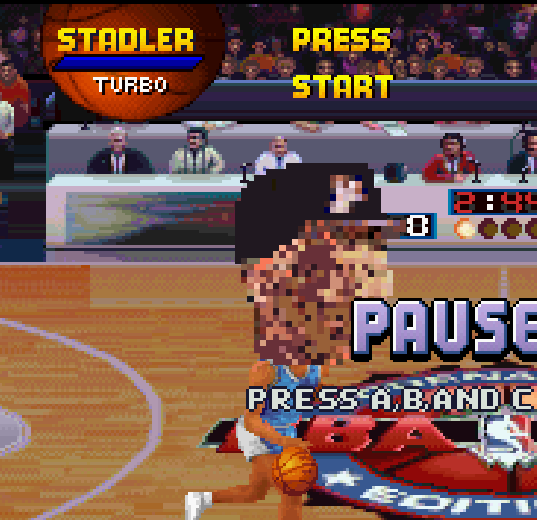 These are the sprites from the data:

They are placeholders as I and C Nguyen cobbled together some money to pay a real artist to make protato sprites, they do however work in game as expected.
He doesn't look too terrible in regular head mode:

The other issue is sorting out the audio, both replacing what is in game and figuring out how the game assigns the audio clips to specific players. I played a few games and never heard Tim Kitzrow say a single player's name.

Replacing the portraits involves decompressing the RNC'ed files, editing, re-compressing them, then I pasted the data back in with a hex editor then padded the difference with zeroes. It seems to have worked just fine. 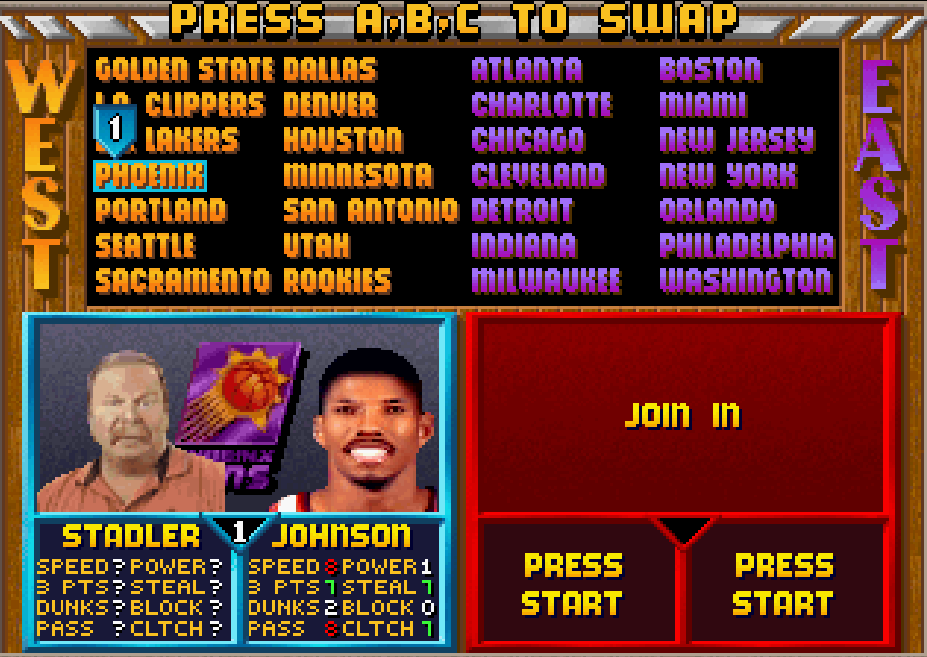 Editing the features screen and pretty much all the other text has been figured out as well. 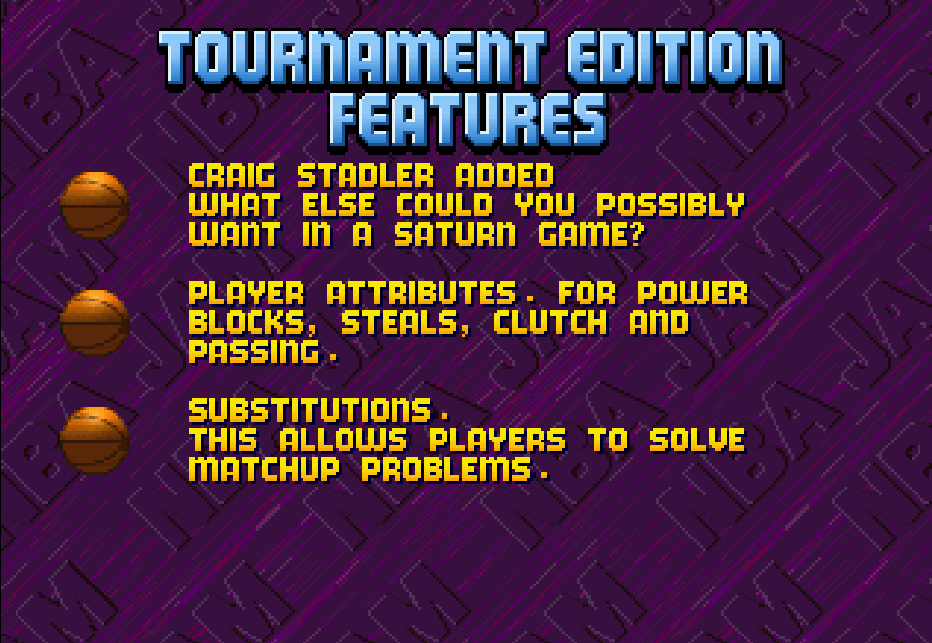 This is the work in progress Google Doc: 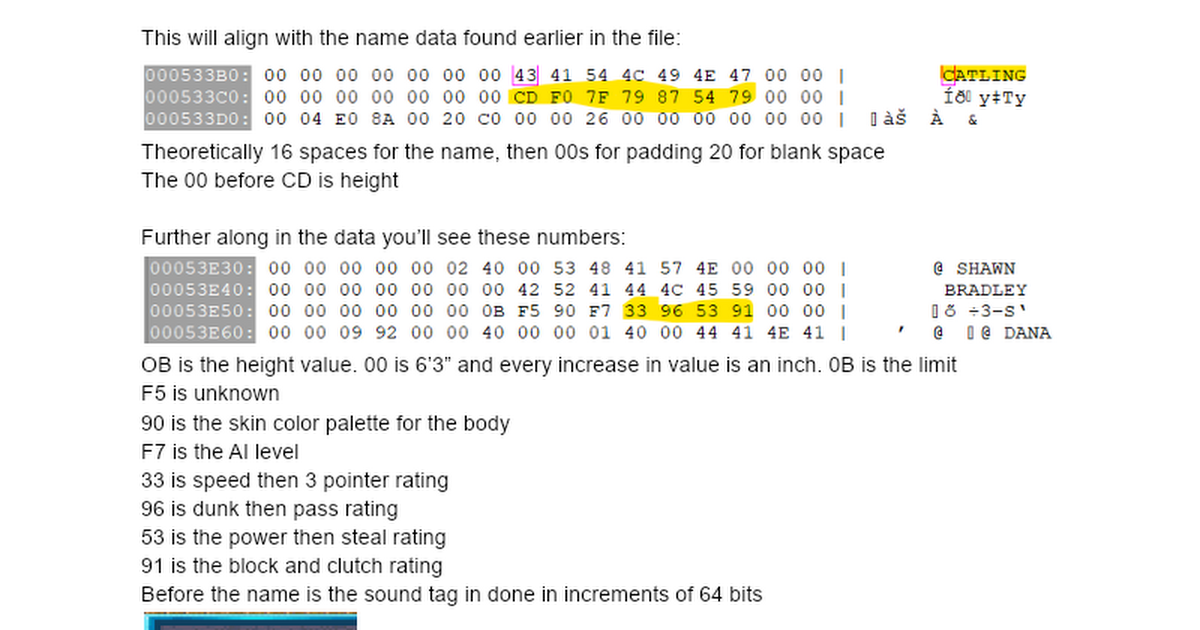 So as a proof of concept I took double Z's PSX hack and pulled the data from Reptile and put it into the Saturn version: 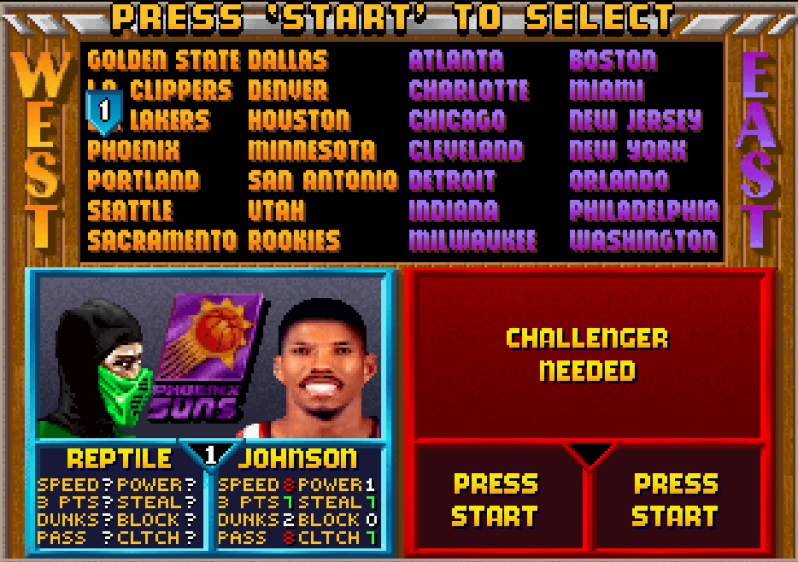 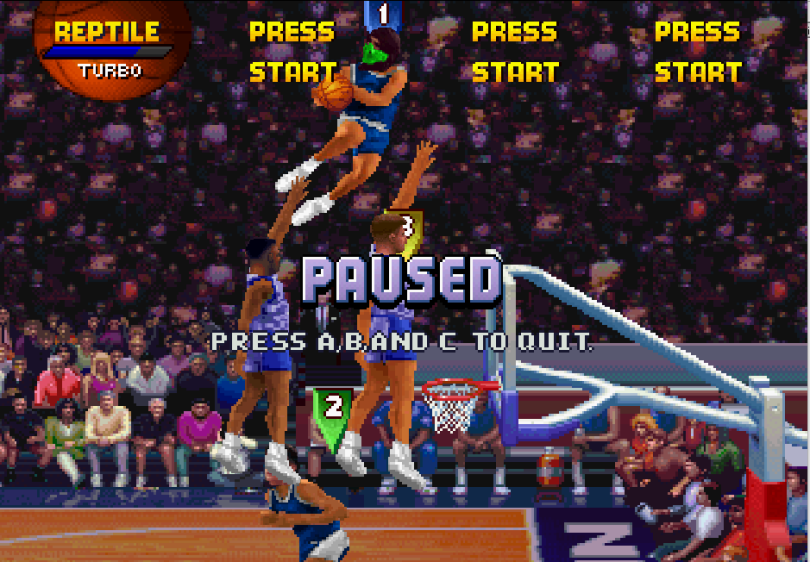 Which means the tools they developed for the PSX hacks will work for the Saturn hacks as well. Its just the data locations are different along with the file names. Shadowmask was kind enough to insert the "Reptile" sound bye from MKII to replace Larry bird, which is the data I over wrote to put Reptile in the game.

Sonic is pretty much done, just need to change his portrait 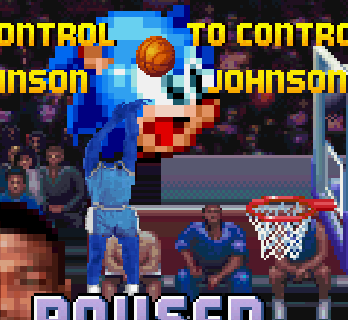 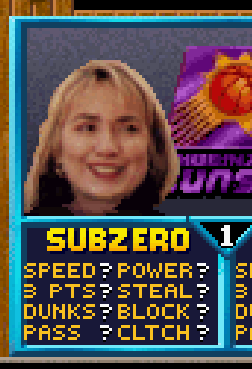 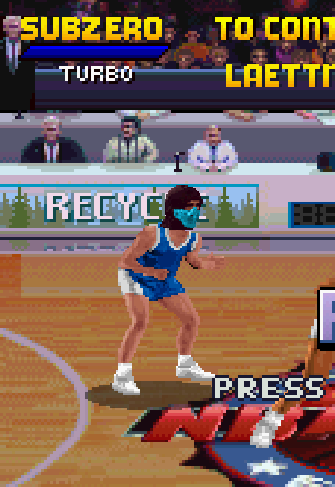 EDIT: my beta tester sent me this screenshot, its great. 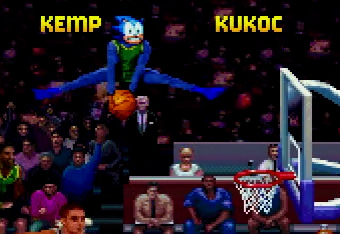 Anyway to make the hidden characters the default ones? That sounds more fun than having to punch in codes to unlock them.
N

It's really cool to see this come full circle - the work Nick did on interviewing the developers, finding out the Saturn and PSX versions shared a lot of code/assets, and then see it turned around into a brand new hack using tools and knowledge developed for the PSX!

slinga said:
Anyway to make the hidden characters the default ones? That sounds more fun than having to punch in codes to unlock them.
Click to expand...

Yes, replacing a normal character is basically the same as replacing a hidden one. The only caveat of that is when you replace say, Tony Kukoc with Scorpion, when you play against the Bulls you'll play against Pippen and Scorpion.


nando said:
It's really cool to see this come full circle - the work Nick did on interviewing the developers, finding out the Saturn and PSX versions shared a lot of code/assets, and then see it turned around into a brand new hack using tools and knowledge developed for the PSX!
Click to expand...

The tool used (that I finally used just to generate the palette of Sonic) is actually a tool used for the Super NES called ASAR, primarily for Super Mario World. I did use the script developed for the PSX version of Jam and there are actually 2 scripts that should speed up the process. 1 Script takes the head sprites and generates a palette and bin file (used with CrystalTile and the like) and another that makes the portrait file.

While the documentation of the PSX version has been extremely helpful, you can't just use the PSX guide and edit the Saturn version. I've learned a ton from @Knight0fDragon and applied that to figuring this stuff out, and also bugging the shit out of him for new stuff as well. Dude is a fucking rock star.

Again , my goal for this isn't just to release a hack, but to provide the information and tools so that anyone can.

So I took the time to break down the entire Names.bin file and it helped me figure out how the game knew what name to say.
Before the name of the player there is a string of 4 values. FF FF FF FF means the player gets no name called (literally only Brooks Thompson has this value as a regular Character, and only Crunch as a hidden character) the rest line up before the players first name to tell Kitzrow what voice to yell out.

Ironically(?) enough Kitzrow has a player data entry, and a voice call out but no head or portrait.

I also did my best to document the "0" file

Staff member
@malenko as you like wrestling maybe you could add some wrestlers from this game :

sadly no hulk hogan hidden to add it to nba jam

EDIT: my beta tester sent me this screenshot, its great.
View attachment 7075
Click to expand...

vbt said:
@malenko as you like wrestling maybe you could add some wrestlers from this game :

sadly no hulk hogan hidden to add it to nba jam
Click to expand...

That would be the best thing ever.

I'll look into maybe adding Razor Ramon, he was my favorite in that game.

So I got the head and portrait tool for the PSX version working, but there's a bit of a bug that makes me do extra work.

So I make the head sprite strip 32x wide and 480x tall save it as a 256 color windows bmp named input.bmp (requirement of the tool)
and it goes from this: 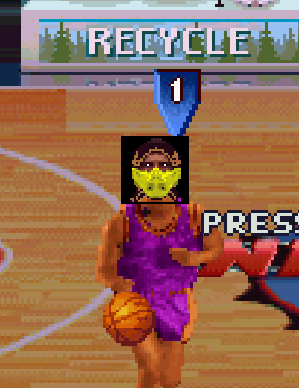 Well if you save the CRAM, use CRAM2PAL and then open the sprite section in crystal tile then load up the palette (in this case its always the 6th pal) it looks like this: (transparent color changed to pink)

So basically I copy the sheet out of crystal tile, into photoshop and swap the pink and the black, then paste it back into crystaltile and it works: 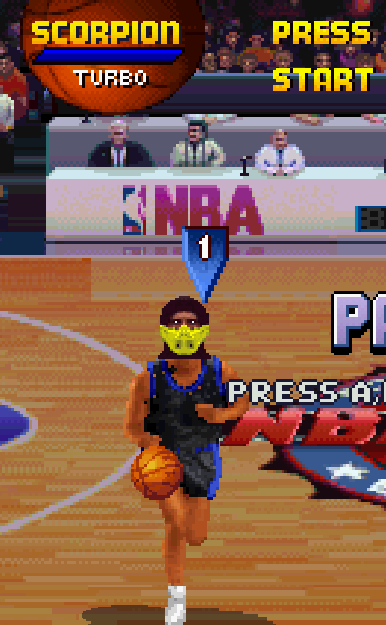 Portraits do a similar thing, with the same fix, but its a little more of a pain because you have to RNC compress the portrait , but Scorpion is 100% in the game and playable: 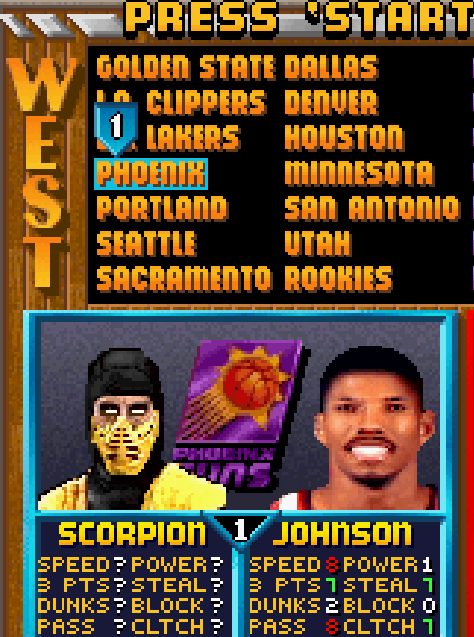 Public release soon (still waiting on the Stadler Sprites) but just so no one has to ask, and I wont forget the codes for the hidden players are as follows:

These codes match the arcade codes, Stadler's is his actual initials and birthday. Sonic's might get changed.
YOU MUST HOLD L&R WHEN ENTERING INITIALS

EDIT:
Finally got around to making and adding the SHIRO! , Sega Lord X, and PandaMonium ads to the scorers tables 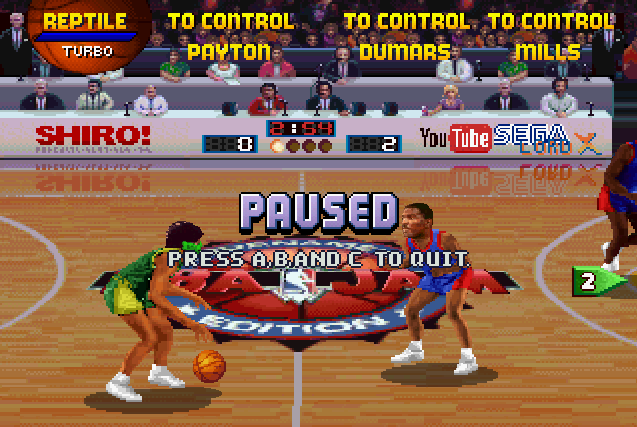 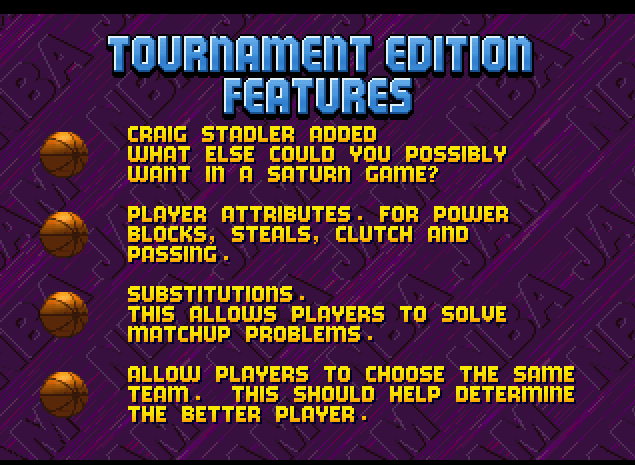 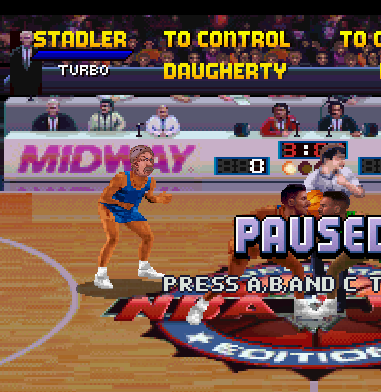