This is my first post. My apologies if this is the wrong forum but it's somewhat related to the Saturn version of the game.

I have recently taken upon myself to try and understand Sega compression for their older games compression, and possibly translate them to my language for fun and learning. I thought I'd start with Panzer Dragoon so I've been looking at its structure.

There is one issue, though - I'm working on the PC version, not the Saturn one, but my question might still apply given the community's efforts and knowledge.

So far I have found out by mysef the compression method (similar to LZSS), which I've managed to unpack and repack - so far without issues. Parsing through the datafiles I've uncovered textures and 2 fonts (a simple one and a slightly italicized one use on the game's menus), but can't find the standard font nor the one used to present episodes: 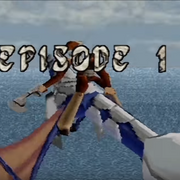 The thing is, I suspect they might be in the ASCII files (.cgx, .cgy and .cgz) but I only found one font inside those; I found the other, italicized one in PANZ_TIT.DLL. I'm not a romhacker by trade though I've translated a few games already (and am in the process of translating more) so my go-to tool to find and edit graphics is a program called Tile Molester Pro. But these Ascii files are virtually identical in structure so I'm also not sure what their function is - for instance, I've looked at the PD version that was an unlockable inside Panzer Dragoon Orta and it only has one Ascii file... Which is also virtually identical.

I was wondering if the community could share any thoughs or guidance in finding it. Any help is appreciated. Thanks in advance!

Gear Supporter
I'm just shooting in the dark here, but it is possible the Saturn version used VDP1 to display these fonts instead of VDP2.

In this guise, these fonts would be stored in a binary little-endian format, possibly a 4bpp CLUT mode or a 16bpp BGR mode (BGR being little endian RGB).

Of course, it stands to reason for the PC version that they'd do something different, but there's nothing stopping them from using the same source dat too.
D

Hi! You're right, 16bit ARGB is the default option to find most of the textures in the game, though at times 4bpp and 8bpp uncover other stuff.

The fonts I am looking for are still nowhere to be found, so I might've missed something. I'm still looking through the files. Other than the two fonts I mentioned I also found an additional one (accented characters, such as "ã") tucked inside a .dll, of all places. The graphical viewer I'm using has 34 bpp codecs, 1 and 2 dimensional modes, row-interleaving and allows for column/row adjusting - and there's a lot to parse through.

Gear Supporter
It's displayed by NBG3 layer of VDP2. It's a 4 bpp tilemap using 8x8 tiles. You can trace its location in VDP2 VRAM with Yabause or Yaba Sanshiro memory editor.
D

Thank you for the heads-up, fafling Unfortunately for some reason neither Yabause or Yaba Sanshiro are running on my system... Yabause in particular will open, but shutdown after I select anything in Options. I'll have to try and get these sorted out. Hopefully they'll help me track the corresponding value in the PC version.

Gear Supporter
What OS are you using ?
You can try to reset the options of the emulators : create an empty yabause.ini file in the directory containing the exe, or empty that file if it's already there. A corruption of that ini file can cause those emulators to crash. It could also be due to a conflict between the 2 emulators because on Windows, if there's no yabause.ini in the exe directory, Yabause and Yaba Sanshiro share the same ini file in %USERPROFILE%\AppData\Local\yabause.
You must log in or register to reply here.