Staff member
for people having some troubles with their lens, two resellers seems to have new parts for most sega saturn model :

Thanks again for your help vbt!

I bought two sets of Saturn lasers off ebay from this fella a while back, so if any of the following helps someone in the future then it's a good thing!
NEW OPTICAL LASER LENS PICKUP for SEGA SATURN MK-80200-50 | eBay

Im down to my last four Saturns.
Not taking a dump on this ebay seller, i was the one who goofed up and ordered the wrong ones the first time around.
It wasn't the sellers fault, i was going off info i had at the time which i have since found a better source for what PAL versions landed in Australia. This ebay seller delivered what i ordered ahead of arrival due date!

My last four working Saturns are all Indonesian Model No.s MK-80200A-03
I have two Chinese Saturns Model No.s MK-80200A-50 (dead lasers) i have not been able to bring back to life. They "green light" power up, but i don't get any video signal.
There is a vid on utoob somewhere on how to test if the motor spins with some wire and a battery. I haven't done this yet though the laser does move back down towards the spindle if you gently push it "out" before hitting the "on" button.

For Sega Saturn on the Saturn, the GameFAQs information page shows all known release data and credits.
gamefaqs.gamespot.com

I have not been able to get either of the two laser models to work in the Chinese Saturns, BUT! ...one of my Indonesian Saturns laser started to play up and not read any discs, even after two pot adjustments it still wouldn't read anything and i hadn't managed to over adjust it to point where it died completely like the two Chinese Saturns i ended up eventually over adjusting and frying. For the excersise i installed the still living Indonesian Saturn laser in BOTH Chinese model Saturns and still had no joy.

So far i have not been able to get the MK-80200A-50 replacement lasers (i bought three) to work in an Indonesian Model MK-80200A-03 Saturn, however, one of the second ordered replacement lasers MK-80200-50 did work and has worked flawlessly ever since after an initial minor glitchy settling down period when first installed!

Strange thing is, when i peel back the hand written stickers on the boxes they are both ID'd the same and i can't see any difference between the two types of lasers when i put them side by side :/ 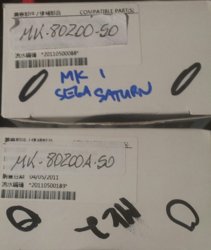