Staff member
There is an anime convention in Baltimore, MD tommorow. Anybody else going?

First time going to one but I hear there are alot of really freaky people there and they are supposed to have one of those live action rpg thingies.

I'm waiting not to miss one when they are in NY or MASS.

I heard they are pretty cool if you're a fan.
R

Are you going to dress up? 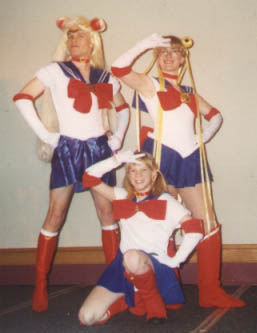 I'll pay you if you post yourself in a Sailor Moon outfit.

Either way, costume or no costume, have fun.

Staff member
Egads thats scary. No, I will not get dressed up. Actually I'm going in my birthday suit.
G

I'm a big Anime fan, but you would NEVER see me going to a convention, let alone dressing up as a character. If I WERE to go to one, I'd dress up as Rolf, and laugh at all the ignorant people (especially the Final Fantasy people) who wonder who the hell I'm supposed to be.

I am Rolf! The second most badass charcter in the history of video games!

Staff member
The freakiest costume I saw there was a guy who looked to be in his 30's in a picachu costume. Now that was scary. That was the most freaks I have ever seen in one day today.

Here are the pictures of todays events. I would have gotten more but my batteries died in the camera

DCP_1210.JPG shows some of the cheapest custom made costumes I've ever seen. :lol:
G

i'm in the mood for a little ranting!

NO offense intended....or at least i hope not!

it makes me sad to see this kind of thing going on, and not being able to be there..........i'm gonna start a 'lend me some air miles' campain to get me to the USA or Japan!

Staff member
It was alot of fun. Some things I should point out....

4 people in a group, 3 were dressed as buildings and 1 was dressed as godzilla

5 people in another group, 2 where ghosts, 1 was pacman, 1 was a cherry, and the other was a power pellet

My freakin camera batteries died and nobody sold any batteries in the dealers place!!!

The common'est costumes there were from the Trigun series and the Inuyasha series.

More freaks then you could shake a stick at.

There was a 9ft tall costume of Grimlock there on the 2nd floor, how he made it up the escalater I have no idea.

Staff member
Oh yea, that mario there was actually a woman. At first I thought it was a man and I said "excuse me sir but can I take your picture? Awesome costume." After taking the photo and a better look at it I realized it was a woman.

was the girl in the red hat with rabits ears good looking?

I now want to go to one of these just to laugh at people hell i'd probably get myself a garbage bag and put that on my head and walk around as if that was a character LOL. if anyone asked me who i was i'd be like "I'm that guy you know that guy" then when they leave me alone i'd run around yelling "i'm the king of the world". (yes my mom had a great time going trick or treating with me when i was a small kid LOL)
C

Staff member
There were alot of PSO costumes but no regular PS costumes.
C