Hello
I'm an hobbyist game programmer who really loves the sega consoles, as such i started messing around with the sega genesis and master system. After a while i was curious to see if i could program something for the Saturn (never coded anything 3D before besides some tests with Unity 5), after searching for a time i found out about the SGL (and the whole SDK) and the Jo Engine, since SGL to my knowledge was a graphics library used back then by the saturn's developers, i decided to use it instead of Jo Engine.
After some struggle i was able to compile the GNU toolchain for the SH-2 and compile some samples provided with SGL, like the akira sample and demo_a, however there are some samples that i can't compile, like the "driving" sample, i get the following error mesages: 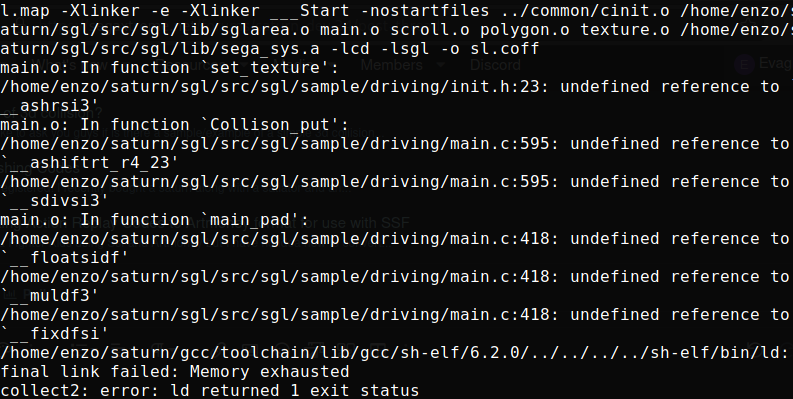 I get that undefined references happen because of some library that isn't linked properly in the executable, but i don't know which library i have to link, and after googling a bit i didn't find anyone using this SDK, does anybody know how to fix this?
If no one knows i'll probably move on to Jo Engine, but i would prefer to try some more with this one before that, i really wanted to code like the people way back then.
Also, sorry for any bad english, this isn't my native language. Thanks for the attention and reading until here.
E

Ok, just an update, i tried compiling the toolchain by myself following this thread, using a newer version of GCC and so on, now even the samples that previously i could compile, now i can't

Staff member
oops, we've missed this topic, @Evaghetti did you manage to solve your issue or still need help ?
You must log in or register to reply here.

A
Need help with setting up my tool chain.