Is this the reason for the dramatic drop in the price of a GP32?

What do you think of this new system?
G

Um it's a piece of crap. It can't decide what it wants to be and therefore, it can't do any one thing right all the way. It's really way to much for a gimmicky thing. IF i want games i'll get a gameboy. If I want a phone i'll buy a phone. If i want music i'll use my ipod.
D

I believe it will fail terribly.

Is that thing ever coming to America?
M

The thing is targeted at suckers like me who actually paid $5 to put Tetris on his phone (which, I must say, was a great investment). At some point I also downloaded the Everquest demo to it too (no idea when, actually), which is quite good.

Oh, right, the point? The thing really isn't meant for the hardcore gamer. There's a billion dollar industry in cell phone games. Nokia is trying to tap it. Which is probably why they disregarded the gaming community's advice in its design flaws.

For us, just smile and nod. It's like the phantom, it's not really aimed at the gaming community at large. Nokia isn't stupid - they aren't marketing this thing as the gameboy killer, because it certainly isn't (I really can't say the same thing about the Phantom, but I will withhold judgment until that debacle passes). It's got an impressive line-up of games right now (remember, it IS a cell phone).

But who knows. The price point isn't ridiculous for a Nokia cell phone. The original star-tac phones went for over $1000, and the silver flip down nokia phones (ala the matrix) were at $500. Both of which did well. What can you say? People are stupid about some things).

Staff member
No interest in it. I think I'm still one of the only people around without a cell phone too but I dont care. I really hate cell phones.
R

Technically my wife and I share a cell, but I hardly touch it
D

I am addicted to keitai, I even have the Rikku Final Fantasy X-2 strap ^^;
M

But who knows? The price point isn't ridiculous for a Nokia cell phone.
Click to expand...

Precisely. It's going for something like AU$500 (RRP $599) and compared to buying a good phone outright (rather than on a plan) that doesn't sound too bad.

That doesn't mean I'm going to buy one. Playing snake on my 5110 is good enough for me.
A

This thing definately had potential, but the already inherent flaws are going to drag it down fast in my opinion. I can see what Nokia was trying to accomplish, and it wasn't a bad idea... but the whole design behind the Ngage reaps of doom.

Shelling out extra for a chic cell phone certainly isn't something new, and cell phone games are all the rage right now, so the market is definitely there. That being said, the Ngage is not chic at all. Its an ugly beast. Read any reviews of it and you find out that not only is talking on it awkward but it looks stupid as hell too. Its part cellphone people! Big Mistake.

2nd-you have to remove the battery to replace the game, then put the battery back in. What dumbasses were designing this? I'm sorry, I see NO logic there whatsoever. Maybe they don't want the cartridges shown so that it doesn't look like a gameboy or something but having to take the battery out is just plain stupid.

3rd-The Ngage, as a multifunctional device, wades into dangerous territory. Multifunctional devices are best for chic value, less space/transport pain, and ease of use. As mentioned above, the Ngage is not chic. The dimensions of this system make it look annoying to lug around in my opinion (especially with the unprotected screen) and the apparent uglyness makes it even less desirable. As for ease of use, I haven't used one myself, but I have a few reviewer points that shout out a big fat no. Changing games & talking on the phone aside (cause those aren't crucial enough ) the Ngage controls are not all there. Sure, there are 10 buttons to use as it is a phone, but they aren't layed out for the purpose of gaming. There are 2 main buttons, pretty much an a and b if you will, and the rest of the buttons are up to the game makers discretion. This leans towards a learning curve for all games that use more than two buttons, something that would suck if your friends saw you play it and wanted to give it a try. Plus, last controller I saw layed out anything like that was the Atari jaguar, which had the button cover things to tell you what did what... and we all know how that system did. Another control issue that is found in the design flaw is the lack of a physical sound control on the system itself, to change the volume of a game you have to navigate menus. That could be a pain in several circumstances if you ask me. How hard is it to have a volume knob, really?

These are mainly superficial comments as I haven't layed hands on the system itself yet, though I doubt I will for a long time. Maybe if Nokia goes back to the drawing board and comes up with a 2nd Ngage model, Ngage SP for all I care, that fixes all these design issues that shouldn't even be there to begin with. As it stands they've got an ugly expensive phone with extra features that are a pain to use.

On the plus side, I must add, that the control pad is suposively superb and the bluetooth wireless is a great addition. I hope that all next gen handhelds come with good wireless capabilities.

To the people at nokia, I have this insight:

LoL, after writing my spiel I came across this article, which pretty much brings up every bad point I did and bashes the designers. I love the statement

Essentially, it looks like you've had a taco surgically grafted to your head.

refering to use of the Ngage as a cell phone. The reviewer also brought up a good point: there was zero tv ads before launch, so many people found in the target market are unaware. Its sad to see but I believe the Nokia Ngage will die fast and quick, and it will just become one of the many blunders in the history of the gaming industry. I just hope this doesn't discourage other potential game system makers when they see this failure, and I hope that companies learn from these mistakes. Next up to bat? Sony's psp.. and thats a wayyys away. I think my GBA will have to keep me entertained for a good long time more.

Here's a picture of the Ngage as a phone from the article I linked above... 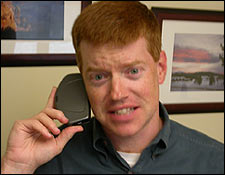 I think we now have a contender for the 32X & Virtual Boy failures :lol:

The new comic strip concerns the N-Gage Special Forces, a crack group of liars and miscreants whose job it is to spread lies about the N-Gage. When I say lies, I mean things like telling people that it is good or that someone should buy one with money.
Click to expand...

Anyone seen that horrible "Become a N-GAGE elite" (or something like) page that Nokia has put up!?

They wanna pay you for playing with that thing!

(honestly, thatÂ´s something they shouldÂ´ve done anyway... no matter what)

I feel like giving the GP32 a try, as I need something else to toy with...

As for a cell-phone... I donÂ´t need a new one, but a new one couldnÂ´t hurt, but then itÂ´ll be a Jap import phone of some sort or a nice new SonyEricsson.

(I guess the Jap phones are triple band or more now, so they should work world-wide, right?)
G

I saw an NGage at an EB today. Got to play with it too.

the ONLY thing I like about the whole system is the cases the games come in. They're like half height DVD cases. Very sturdy and good for protecting games (HELLO NINTENDO). They even have those sticky protection strips that DVD movies have on the top of the case and that PS2 and Xbox games have as well.

BTW it takes about 5 minutes to change and start a game.

9. Navigate menus to get to the game.

I do have to say the screen is nice. Easier to look at then the GBA's.

There's even a couple of TV adverts running for the n-gage here in the UK. Whats up with the 'wrong way around' screen? :looney :looney

But, it'll fail like that Tiger Game.com, anyone remember that?
A

Wasn't that was the one that Sega made Sonic Jam and Fighters Megamix for. Did anyone ever play them?

Wasn't that was the one that Sega made Sonic Jam and Fighters Megamix for. Did anyone ever play them? [/b][/quote]

Yeah thats the one... It also had Duke Nukem 3D on it too. I never played on one.. I wonder if there's an emulator out there for it somewhere... (i doubt it)
G

/me looks at his Game.com

The games are unplayable due to the HORRIBLE LCD screen. It's even worse than the original GameBoy screen. Of the 9 games I have for it the one I spent the most time playing was the built in solitare.

Wish there was an emu for it (or even the roms for that matter). At least without the bluring I could tell WTF Sonic just ran into.
L