Staff member
Ocean was preparing the game for the Saturn. You were Kevin Kostner and you had to protect a village against savage hordes.

Was this released on any system? I remember it was supposed to be on the 3do also. Those pics gotta be from a pc (before compiling) no way a saturn could handle that.

Xavier said:
Was this released on any system?
Click to expand...

I remember it was supposed to be on the 3do also.
Click to expand...

In fact it was Interplay who worked on the Playstation/3DO version. There are some info here from a designer of the game :


Those pics gotta be from a pc (before compiling) no way a saturn could handle that.
Click to expand...

Why not if it was pre-rendered pictures but sure it not a playable part of the game.


I've found an interview on gooddealgames which deals with the Saturn version :


MT> What was it like creating the movie licensed game, Waterworld, for a movie that really stunk?

SW> While we were working on WaterWorld for the VirtualBoy the movie wasn't out yet, so we didn't know if the movie would be good or not. My wife Susan & I thought the movie turned out better than what the critics were saying. As far as working on the WaterWorld game for the VirtualBoy was concerned, we loved it! We got to do anything we (Jason Plumb & I ) wanted to do as far as programming and designing. The game sold out. I think that may've been a 1st for Ocean of America at that time.


MT> Was the unreleased Saturn version of Waterworld similar in play to the Virtual Boy release?

SW> Yes, conceptually, but graphically it was awesome! We had some great graphic talent working on that game. After InfoGram bought us, they said "Why are we doing a WaterWorld game?" ...The bummer is that our game was code finished!!!! They decided not to release it!!! I couldn't believe it. Those idiots!
Click to expand...


PS : There is the email of Steve Woita maybe we can ask for more details (maybe the game) ?
G

Here are some Waterworld previews I came across while reading some old EGMs:

gameofyou1 said:
Here are some Waterworld previews I came across while reading some old EGMs:

Thanks a lot for these scans It gives a better idea on how had to be the game than my scan, it's like Panzer Dragoon on the sea. The GFX looked really good.
N

Wow that looks great too bad it never came out. I liked the movie despite it being generally disliked. Sad to hear the game is sitting somewhere completed with not a leak on the net.

Staff member
I liked the movie too. I don't understand why people thought it was crap.

Staff member
Honestly I liked it too, mostly. Forgettable though.
A

Oh come now, Waterworld was a terrible movie, but it was so rediculous that you gave up any attempt at rationalizing any of it, so you just sit back and zone out and enjoy it. Entertaining? Very. Good? Not really... I still want that game though!
M

How does one go about acquiring unreleased but completed titles? I.e., how did Plane Crazy and Half Life get released?

Staff member
You could just ask them nicely . Or if you are a 1337 hax00r you could just hack their computers and grab it. Failing both of those I am sure a bribe or a purchase (of the right to code and whatnot) may work in the end.

I have no idea how half life for the dreamcast was released. All the info I can find just says it was leaked and thats that. I know the Sonic Xtreme Demo was sold by an undisclosed former employee or so on and so forth.
G

Here is a new link to the articles (I got rid of AOL):

I would love to see this game released some day. 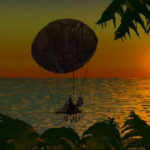 Within the book is an in-depth and detailed 12 page story about the unreleased Waterworld by Software Creations/Interplay for the 3DO and Sony PlayStation platforms.
www.gamesthatwerent.com
You must log in or register to reply here.

S
How to encode videos to be played on real hardware?