We at the SSMTF really would like to know how many people downloaded and played Floupix Ping Pong, and what you think of it. Vreuzon spent about one year to develop it, and though WE have bunch of fun playing it, we'd like to know if it was worth the hassle. 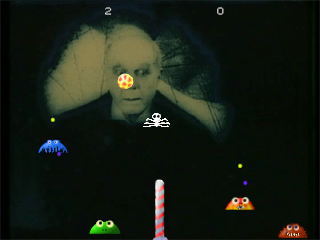 Staff member
I really like Floupix, too bad I can't play it with other humans players ...

I played it one player, but I was a HUGE fan of the older version of slime volleyball, and this version seems even better, with a lot more polish.
M

I haven't given it a spin yet, but I will soon. :thumbs-up:
D

I'll download and burn it tonight. This sort of excellent projects deserve support. Can it be played with just one player? (no one around at the moment)

Yes you can play it alone ! (slinga did you test the last version ?)

There's AI in Floupix ! Not a great AI, but it works. You can use as many CPUs as you want, just press C once you selected a floupix and it will turn into a CPU player.

But of course, this game has to be played with friends.

There's AI? WOW!! I didn't see that feature, I will check it out again tonight.
D

So, slinga, what do you think of the "great" AI in Floupix ?

It beat me. Damn you Vreuzon!!

But I kept it close. And it seemed like the CPUs on my side were not as good as the ones on the other team...then again I could just be making excuses

Seriously though, great job Vreuzon. I'm working on my next 12 player game, but my comp is hosed at the moment, and fedex is taking there sweet time getting me the part I need.
V

All cipius should be playing exactly the same way (As far as i know...). You can take a look at the so called IA code (cipiu.c). Why not modify it, add the code and let people decide which algorithm their cipius will use ?

By now, ou can choose a cipiu behaviour (defender, attacker...) by modifiying its starting position (press B until its position is correct)

Did you try a cipiu-only game with 3 teams, and 12 floupixes in chainsaw mode ?

What will be your next game ?

I'm working on a 12 player balloon fight. I don't have windows on my pc yet, so I can't really work on it. And don't expect anything for a loooooooooooooooooooong time. 1) I'm a terrible coder, and 2) I still haven't found an easy way to convert sprites to saturn format. h
V

Can you tell more about that ? Is it some sort of speedball 2 ?

(by the way, who can be that man who did vote "I don"t care about floupix" ?)

As for the sprite conversion: if I would remember how I did it with MineSweeper, I surely would tell you. But I think it was not that difficult. Why don't have a look at the sources by yourself?

About floupix, it's really cool that there is CPU AI. Other multiplayer games like Death Tank can't be played by only one player.

Thanks a lot for your work, vreuzon. Along with the 12 snakes(why not monkeys? I never understood that movie) of slinga it's been the only release in the past year.

Noone got a suggestion what to improve? That's one of the things that a coder wants to know through feedback... .

Oh, what I remember for me it's relatively difficult to remember the meaning of a bonus just by his color. Those bonus sprites could be more self-explaining. And I was confused by the bunch of options that can be choosen. Some of them I still don't understand. Sorry .

Well, considering bonuses and colors, I'm aware of that as I already have been told by some friends of mine. The reason for me not choosing self-explaining bonuses sprites is to keep it graphically simple. Just keep on playing and it eventally will become natural (you can play without bonuses too) as it did with most of my friends.

I was confused by the bunch of options that can be choosen. Some of them I still don't understand.

Options names are precisely choosen in order to be unclear. There are some explanations in the floupix home page *. i like this idea of letting the player discover options meaning by himself: the game is not designed for a one-time use. (which option don't you understand ?)

Don't be sorry, for I thank you for your comments (always welcome, as you wrote)

Yes I do. A friend of mine insist on me coding some sort of 12p speedball II. There is a ongoing project of a static screen top viewed 12p tank game. I did experiment a little with the virtual gun (a very simple paint programe), too, thanks to djidjo.There was a wheel and gun nightmare car game (remeber the wheel I won for last dev contest, I suppose). Some people of the ssmtf keep on thinking of a 12p platform-karate game (stephano karate maitre). I almost wrote a very simple pure reflex game, playable and almost finished that will probably never be released (It was only targeted at deciding who would wash the crockery, buy or cook food,...).

I just have had an idea of a new easy to develop game with balls and circles that I'm going to start coding very soon (hope i'll be finished at the end of the week end, though it could last another year...). 12p, too.

(rockin'b can you tell me where to find a snapshot of you voxel engine ?)

Man, I just don't have enough fingers on my hand to count all the projects you listed above. And I like tank games very much(oh good ol' Super Battle Tank 2 on SNES), but Saturn hasn't got much of them.

Regarding floupix CPU AI: I know it might not be possible to fix it by a simple modification...I thought sometimes the CPU players of one team compete about the ball, instead of doing real team-play.

But that's just a sidenote, CPU teamplay is not really necessary.

(I've attached screenshots in the saturn-dev topic: Anyone coding anything?)

Have you got a paypal-account? Call me stupid, but I really thought about how one could support homebrew games for Saturn.
V

Have you got a paypal-account? Call me stupid, but I really thought about how one could support homebrew games for Saturn.

I don't intend to earn money with these projects.
You must log in or register to reply here.