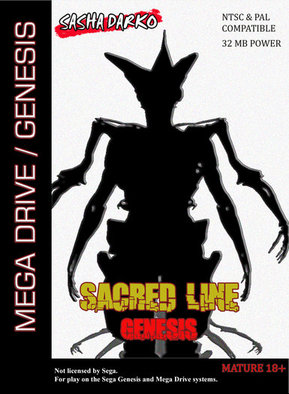 About:
Sacred Line Genesis is a brand new Adventure / Visual Novel game which was developed exclusively for the Sega Mega Drive / Genesis videogame system.
It tells the story of Ellen, a private detective, who is trying to survive in Eastern Europe. Lately detective business, which she inherited from her missing sister Sarah, almost ceased its existence and one day before she was going to close her office she got an anonymous call. The unknown asked her to find some hidden forest outpost and told her about its position. That was just the beginning.
The game is free of censorship and recommended for Mature audience only (Blood, Intense Violence, Mature Humor, Minor Sexual Violence Reference, Strong Language, Suggestive Themes, Violent References).
It's not a port, not a translation, not a rip-off with copyrighted stuff. It is based on my own game Sacred Line, which was released for free for PC/Mac on Desura.

Features:
- High quality 3D graphics (highly recommended to play on CRT TV)
- WAV soundtrack (which sounds like a GBA output, it also won't be slow for PAL users)
- Unique and memorable setting, story and environments
- Text-based dice fighting system (ideally you need a dice...but you can also play without it)
- More than 20 endings: normal, secret and deaths, deaths, deaths
- Don’t be frustrated: if you die, you’ll start from the last checkpoint
- In-game enclyclopedia will help you learn more about characters
- Compatible with Flashcarts like Everdrive
- Any buyer will be added to a special list: it means you will get discounts and special bonuses for all further products. Money is support and support will not be forget.

Not so good features (GINCS-specific things you may not like):
- The game uses GINCS engine, its Visual Studio modification. It means it uses WAV soundtrack and WAV files cannot be stopped immediately there, they will always play to the end. Not everyone will take it as a problem but it must be mentioned.
- Text has no shadows. Somehow, just theoretically, IF you're crazy enough and decided to play any GINCS game via very, very, very bad RF connection on a very, very, very bad, just simply broken LCD screen and there's also a gas all around you, the text will be hard to read. But nobody ever reported that kind of problem since the creation of GINCS (2006 year).
- There is a super exotic GINCS bug which was reported by GenDev user: the game might crash if you will insert gun or mouse to the Port 2

It's a final demo which shows all the game features. It will end after a first fight with a skeleton.

Release [Cartridge Run]:
It's complicated and not yet dated.

Screenshots from the Demo:

Screenshots from the Beta (Beta contained some grammar/spelling errors, Final version and Demo have been proof readed):