I recently tried to install a switch on my Saturn that let me switch between 50hz and 60hz and I apparently didn't do it correct. I was following a few guides but it turned out none of them had a motherboard identical to mine (Model 1, 171-7069B MAIN, 837-11892-01 PAL). The main problem being that my board is lacking the JP2 which throws every video guide I've found out the window. Take a look at the picture:

There's only a lone JP1 next to R29. With the use of a continuity meter I noticed that (B) and (C) were connected. Much like the one side of JP1 and JP2 would be, and they are connected to the 79th leg on the chip on the other side. (A) was identified as 5V and (D) as ground, they beeped when I tested them to the ground and 5V pins by the PSU. So I tried to convert the information given into my situation (the 79 leg wants either ground or 5V to decide which hz to run at, correct?). I joined (B) and (C) with a yellow cable that I soldered onto the middle pin of the switch. I then soldered a black cable on (D) and the leftmost pin on the switch, and a red cable on (A) and the rightmost pin on the switch. This way one position would give me "ground and pin 79" and the other would give me "5V and pin 79", correct?

When I start my console (and run a game through Action Replay to get it to run at all) everything works as normal on 50hz. Slow, but it works. When I switch over to 60hz it's a black screen without audio. And when I switch back to 50hz the system has frozen, controller inputs no longer work. Any ideas of what's gone wrong? Any thoughts at all would be greatly appreciated. Thank you!

Edit:
I have read that if I undo everything I just did (which I can, I've been non-destructive and also saved the 104-part on R29) and cut the trace in front of PLL Pin 1 then I can use the SW4 ports instead, is this correct? Also - if I end up doing that - can I solder the GND, pin 79 and 5V to the same on-on-switch and make the hertz switchable that way? I really need to be able to play PAL games as well (some of them are PAL optimized and won't work on 60hz). 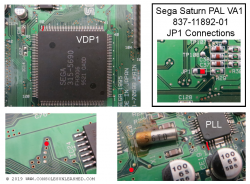 A thought of my own: isn't it enough to just cut the trace leadning to PLL pin 1 to get the switch as it is now to do its thing? Do I really have to reverse the previous steps?

Edit 2: Yep, that did the trick. Wow, I figured it out before the thread even got approved. If this is read manually before approval then hi moderator/admin/similar, I'm so sorry for wasting your time.
Last edited: Mar 3, 2020
R

Hi Starfighter, thats really interesting and exactly the issue I'm having with my PAL console.

Can you walk me through the exact steps I would need to follow on an unmodified console please?

Cheers,
Darren
You must log in or register to reply here.

I
Question about US Saturn with PAL games