A Game I'm Working on: [TERMINAL]

I want to talk about the game I've been working on here, chiefly due to my obvious lack of time being spent on the SEGA Saturn SDK. I am still chipping away at it as and when I can.

I began work on this game in October last year (2015), when I started looking at how feasible it would be I came across one huge hurdle. My development kit stopped outputting video due to the video encoder deciding to die on me. I eventually fixed it in the first week of January 2016. A lot of people may not like the fact that I'm using the Katana SDK instead of KallistiOS. This is not an indication of what I think about KallistiOS, on the contrary. Since I started programming I wanted to make a game for the Dreamcast with the tools developers I respect and admire used. The whole reason I started programming was because of the Dreamcast. I know it's looked down upon to use the Katana SDK; my intent isn't to belittle the efforts of the amazing work done by others on the legal homebrew tools or the games which made use of them, rather I just want to have as close to a full experience as possible developing for this wonderful system. Of course, this is on a much smaller scale than even the smallest development studio at the time games were still being officially made for the machine. Anyway, I wanted to get that out of the way so I can talk a little bit about the game I'm going to be working on.

[TERMINAL] (WIP title) is best described as a cyberpunk third person action game. I don't have an elevator pitch for the single player campaign as I want to focus on multi player for the time being. At the moment I have planned for four modes for two teams per session: Uplink, Corruption, WipeOut, and Disc Run. Uplink involves capturing a series of nodes in order to establish an uplink to your respective faction's HQ. Once a node is acquired by a team, the team gains points for every second the node is under that team's control. Corruption requires the offensive team to gain access to the defending team's mainframe and corrupt 100% of their data. WipeOut is a simple deathmatch-styled game. Most kills at the end (or up to a set amount) defines the winning team. Disc Run has players fighting against each other to steal the opposing team's data stash (I think a format such as MO disk would be neat for this).

I'm looking at getting four-player split screen working. For now it is planned as an on-line game only for the multi player mode. If anyone wants to download the game, it is available in GDI format here. It can be burnt using DC2CD and ImgBurn or it can be played on an emulator. I haven't tried it on anything other than Reicast as far as emulators are concerned.

The source code (along with the compiled assets, unfortunately I have no build pipeline yet) is housed here.

It's not at all interesting, the code is a mess, and the art is, well, it's terrible =P. I really wanted to get what is using up my other free time that I'm not spending on the SSSDK out there.

I'm aware that this is not good news for the SSSDK, however, I am not putting it on hold. I will continue to work on it as and when I can. I hope everyone can understand that this is a very personal project for me and I don't intend to deceive anyone about my intent in regards to the future of the SSSDK.

See underneath the spoiler tags for a video of the 0.0.0.76 build and some pictures:

Great ! Do you have a video or screenshot(s) available for people not using Dreamcast ?

I totally understand your choice about SSSDK. This is a project done on your free time, so it's up to you to decide to pause/stop/continue it or not. Unlike real work, you can pause homebrew stuff when it becomes boring

Okay, I have a video uploading to YouTube and am taking pictures right now. I'll update the first post in a short while.

Thanks for your support, cafe-alpha =D.

This looks like a pretty ambitious project you're taking up. I really look forward to seeing it develop. If you're looking for an artist to help design the look of the game moving forward, I'll be happy to volunteer. I'm already doing cover art for a homebrew NES game from 8-Bit Evolution. I can show you sample artwork if you like.

Thanks, @Elkplaysandpaints. I feel getting involved with artists at the moment may be a bad move, due to the infancy of the game. Though, if you're okay with iterating through different ideas I'm willing to give it a shot. For some idea of what I'm thinking of visually, take a look at the following images: 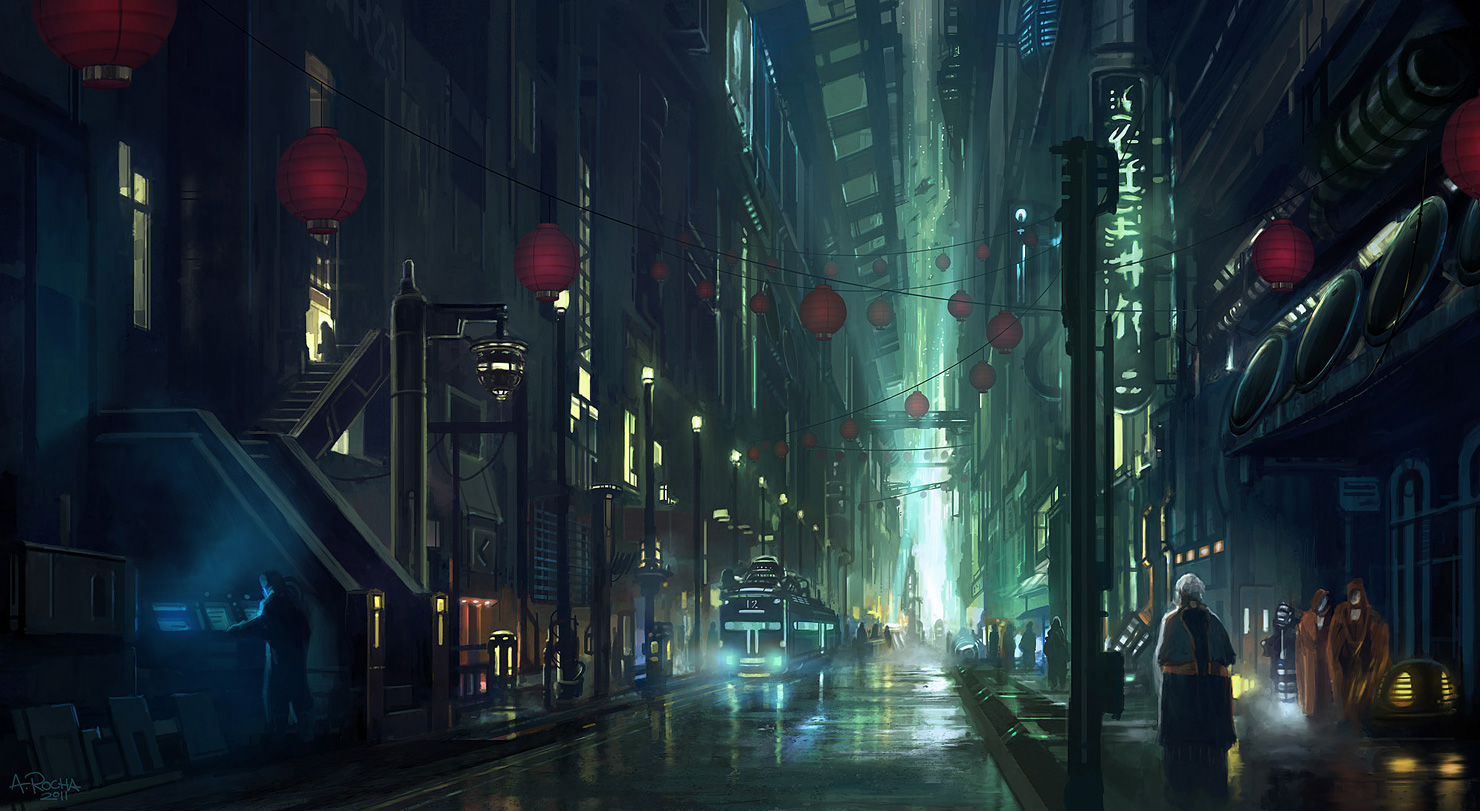 Something along the lines of the neon-grit of the streets mixed with the clean, clandestine skyscraper interiors. Maybe it's too stark of a contrast to work and I haven't dedicated much time to working on the look before getting the mechanics implemented.

Staff member
Are you a Blade Runner fan?

I don't know if I'm a fan as such. I liked the film and have yet to read Do Androids Dream of Electric Sheep? The art direction in the film is neat, and the derived fan art captures the essence of the celluloid well. The style of Blade Runner and other cyberpunk films are what I'm looking at for the visual direction of the game.

Staff member
any news of this promising project ?

vbt said:
any news of this promising project ?
Click to expand...

+1 Im also hunger for updates!
You must log in or register to reply here.