Talking from total ignorance, in yabause with satiator suport there is a not full implemented command.
satiator/satiator-yabause, line 118.

This command really loads menu.bin or menu.bin is only a file for test purposes???
There is some variables referencing "bios".
W

Waterfuell said:
Talking from total ignorance, in yabause with satiator suport there is a not full implemented command.
satiator/satiator-yabause, line 118.

This command really loads menu.bin or menu.bin is only a file for test purposes???
There is some variables referencing "bios".
Click to expand...

Answer myself, command 0xE2 is for get the MPEG ROM according to yabause wiki.

I have an alpha of Save Game Copier that adds the "Dump Memory" option . I haven't tested much but here's a screenshot dumping the BIOS: 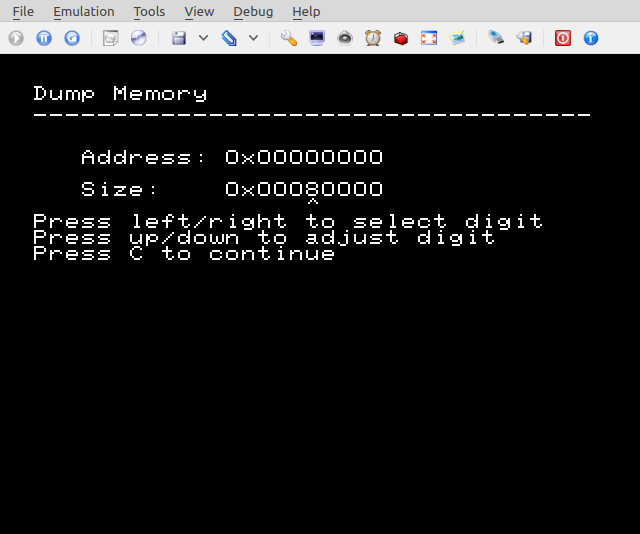 You can get the alpha here: Release Dump Memory Alpha · slinga-homebrew/Save-Game-Copier.
M

Registered just so I could say Thanks and that this is incredible! I was playing around with this last night and it works great. And here's the kicker: my laptop doesn't even have a proper microphone or line-in jack, just a combo jack for headsets and I don't have a proper connector for it. So, I literally just had the audio play through a 20 year old set of crappy PC speakers into my laptop's microphone... And it worked! Amazing!

Glad to hear you were able to get SGEX to work wirelessly. I'm surprised there were so few errors. I get about 1 bit flip per 500 bytes or so when I have my Saturn wired directly to the line-in on my PC. I would expect wirelessly to have much higher error rates.
M

slinga said:
Glad to hear you were able to get SGEX to work wirelessly. I'm surprised there were so few errors. I get about 1 bit flip per 500 bytes or so when I have my Saturn wired directly to the line-in on my PC. I would expect wirelessly to have much higher error rates.
Click to expand...

Any tips for reducing the error rate? I picked up the Sabrent USB audio adapter you mentioned in chat. I was able to transfer a ~2000 byte file successfully (from my FDD, no less), but my Sega Rally records always fail. That file is ~5000 bytes. Tried transferring it from both internal memory and floppy and just can't get it to come through. Always get the same error:

Presumably you've copied it over multiple times? What are the file sizes like? For rally_records.bin. Do the sizes vary? Are the MD5 sums of the files the same?

There might be some other bug going on. I've transferred 20k Fire Pro saves before without issue (with Reed Solomon fixing a few errors).

What was your error rate on the 2000 byte file? The confidence values above (when you were transferring over-the-air) look kind of low. With a cable plugged in I would expect around ~4.0 or higher confidence.

It looks like from your screenshot you are working in a VM. What if you saved the audio file directly as a .WAV or whatever. Use whatever recording software you want. Then use minimodem's file input option ("-f") to process it?

And if you have the minimodem command prompt output I can take a look at that as well.
Last edited: Oct 27, 2020
M

I'll have to take some time to play around with it and get specific answers to your questions, but I just tried again and here's the output:


Bash:
Edit: I just tried recording to WAV first. The test "This is Cool" transmission worked just fine like that, but the full file failed with the same error as above.
Last edited: Oct 30, 2020

Would you mind sending me the wav file? I can see if anything make sense.

Unfortunately it looks like bytes are getting dropped in transmission. All of the chunks should be ndata=130 (except for the last). I'm seeing quite a few 129s, 128, etc. The Reed Solomon encoding I'm using can't recover missing bytes, only flipped bits. If you compare the size of rally_records.bin to the total transfer size in SGC you will see the sizes don't match.
M

I appreciate the follow-up. Just now had a chance to come back to this. Here's the original .wav that I used to create the rally_records.bin file from the output above. (Or at least, I'm pretty sure it's the same one. It's been a few weeks!)

That was actually a fun brain teaser.


Code:
If you are curious here's how I did it:
1) I reviewed all of the "### NOCARRIER ndata=130" values. Each transmission (except the last) should be 128 bytes + 2 sync bytes. I noticed the 6th one was only 129 so it clearly lost a byte.
2) I grabbed the entire block containing the missing byte. I then inserted a 0x00 at position 0-254 until Reed Solomon was able to decode. RS is able to recover bit flips not missing bytes.
3) Once I found an offset that worked I edited the rally.bin file and added a 0x00 there.
4) I was now able to run SGEX and RS was able to recover correctly

Nice. Seems like this could this be done programmatically?

I have some huge files (like Sega Rally and other racing game ghost data) that I'd like to back up, but clearly it doesn't make sense to do this manually.

Basically if you know the number of missing bytes it shouldn't be too hard to script it up.

Do the large files not compress well?

Also stumped why you are running into these issues. Could you try recording via your phone (assuming you have line-in, dunno if that's possible) or with another laptop? Maybe the AV cables? Power issues to the Saturn? I don't claim to know what I'm talking about, just some things to try out.
You must log in or register to reply here.