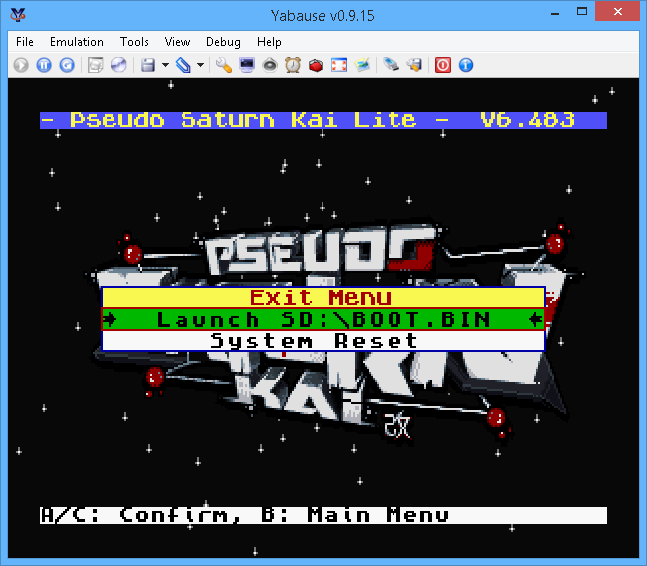 tzmwx designed great pcb to avoid finding spare controller connector. You may download gerbers and check info in his post 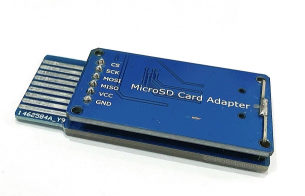 Here is nice video with english subtitles, showing SDLoader in action (though, a little older version used), and also, another great idea of making adapter for it. Hope, author will release his adapter shell 3d model for others to repeat.


UPDATE:
v0.381 changelog:
- video compatibility fixes
v0.374:
- code cleanup
v0.372:
- X+Y+Z+START for returning to CD PLAYER
- Enabled dumping for ROM carts which failed vendor_id/device_id probing
v0.37:
- Merged Serial Loader into SDLoader. When in "main" menu, serial loader enabled. How to use it check at /Serial/serial.txt
- Rom carts flashing: added additional write check for safety
v0.35:
- Experimental: Enabled backup/flashing for boot rom carts (flashing tested ok on SST29EE010 based "red cart")
(not all memory supported, if unsupported, flashing will be disabled, report probed vendor_id/device_id if you want to add support for it)
- Use flashing at your own risk, backup first. If something goes wrong at flashing process, you must have alternative way to restore cart firmware. Remember, it is experimental feature.
v0.34:
- Enabled restoring for other compatible backup ram carts (need test reports)
- Enabled filebrowser to select backup file to restore (no more hardcoded filenames for restore)

Short version:
It is just a Proof Of Concept. I wanted to backup my saves from saturn.

Tested SDLoader with non sdhc, 2gb sdcard, with fat16. Probably will work with sdhc and fat32.

At default, this tool loads file boot.bin to 0x06004000 from sdcard and run it from there.
If you create plain text file named boot.cfg, you may load any other file, to any location and run it from any entry point (or just load one binary, but jump to some bios/arp function, or something, you decide yourself how to use it).


Long version:
Wanted to backup saves from my saturn, so i decided to do sd card tool which use second gamepad port to communicate with sd cards. It is just a proof of concept, but it works. To match levels, fastest and cheaper way was to utilize microsd module (you may get one in any electronic diy shop, get microsd one, as it includes 5v tolerant buffer ic and 3.3v voltage regulator). If you dont want to use, or dont have such module at hand, use any basic level shifting and do not wire sdcard directly to saturn gameport2.

As it is quick proof of concept, for SDLoader i used Petit FatFs - tiny fatfs library, so, it is limited to work only with existed files (no function to create new files). Also, tested it with 2GB sdcard (probably, not sdhc) with fat16 fs. It may work with sdhc and fat32, but i not tested it. So, to backup saves from Saturn to sdcard, you need to prepare 64kb file named bkramsv.bin place it at sd card root (SDLoader will overwrite it with your actual saves), and to load saves from sdcard to Saturn, SDLoader looks for 64kb bkramld.bin.

Also, it may load and run binary from sdcard. Default, it looks for file "boot.bin", load it to 0x06004000 and run from there. But if you create file boot.cfg with simple format:
file=FILE.NAM
load=0xNNNNNNNN
start=0xMMMMMMM
it will try to load FILE.NAM to 0xNNNNNNNN and jump to 0xMMMMMMMM

About speed, it takes aprox. 4s to backup 64kb backup ram (saves) to sd card. And about 9s to load and execute 40kb binary.


As for port pinout: if you look at game port on console from front, it is 1 to 9 from left to right

Staff member
This is a super cool project. Great job!

Patron Supporter
Was not expecting this, thought it was some update to your falcom translation. This is absolutely awesome news.

So how fast is the data transfer through the game port compared to reading data off a CD? Would you be able to play games loaded onto the SD card with your method?

Also, how do programs run off the SD card? Does the device take over the Saturn's normal boot method, or do you have to run the provided ISO through another method, like a Pseudo Saturn Kai cartridge? Can you show a video of it working?

Patron Supporter
If it takes 4 seconds to do a 64KB file, then it seems that they are only pulling 16KB/s, Could need some optimizing to make it work faster.

Gear Supporter
64 kB file for internal back up ram means that every other byte is useless and can be stripped out as the actual size of the backup ram is 32 kB.
That should lower the transfer time.
B

Great.
You are opening the doors to the future for the mighty Sega Saturn.
Maybe one day you'll be able to run .isos straight from the SD card at low cost.
Could you pass your file in binary mode?
I'll try to record in my action replay and with that I don't need the cd sdloader.
I want to make the sdloader boot directly from the action replay reflash.
is it possible to send in binary mode?

braza said:
Could you pass your file in binary mode?
Click to expand...

Upd. Just checked - it works from RomFs at PSKAI (at least in Yabause). Also it works if converted to arp firmware with cafe-alfa's mkfirm tool. But, i suppose, variant with placing it at RomFs in Pseudo Saturn Kai is much more useful.
So, would be glad to hear your success story! 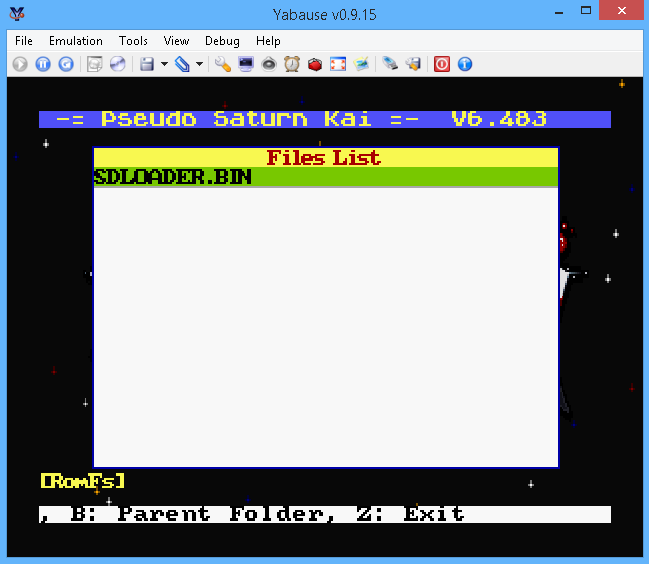 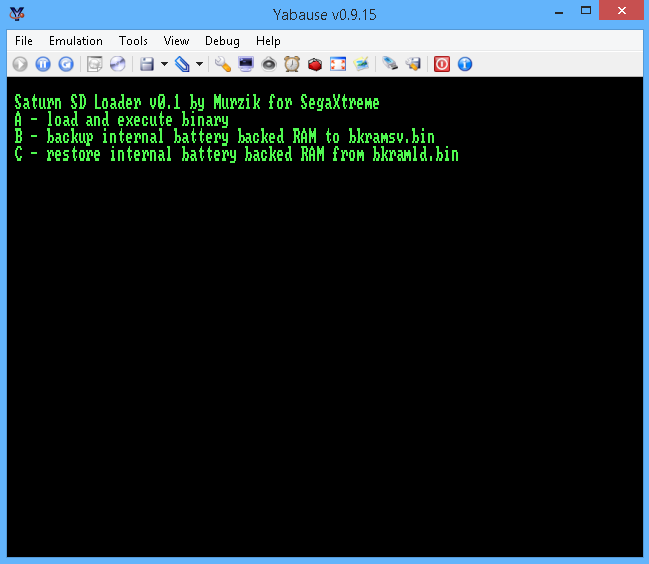 This looks great!
I take it that your SD card adapter has a 5v to 3.3v convert built in?
If so, which one did you purchase?

mrkotfw said:
This looks great!
I take it that your SD card adapter has a 5v to 3.3v convert built in?
If so, which one did you purchase?
Click to expand...

Thanks for the file in .bin mode.

Do you have mkfirm.exe ? I can't find it anywhere, not even on the blog.
M

mrkotfw said:
I take it that your SD card adapter has a 5v to 3.3v convert built in?
If so, which one did you purchase?
Click to expand...

Most common option - it is same module version as in tzmwx message.


braza said:
Do you have mkfirm.exe ? I can't find it anywhere, not even on the blog.
Click to expand...

You may get it at SatCom page on cafe-alpha site. It is in Download section, in SatCom_release_20110426 archive.
M

Just for fun, patched lastest official PSKAI Lite version (256kb) firmware bin (PSKAI256.BIN) to make it bootable binary to load and run from 0x6004000 and also "enabled" rom-less mode (no cart mode). Seems to work on Yabause.
So, you may try to load and run it from sdcard.

To braza:
Maybe it will be handy for you, if you will overwrite your cart with mkfirm. Any way, will be glad to hear about your experience.

Nice result, braza! Glad that everything works as expected. You are welcome Its really handy that you did bank switching on your arp. I also recommend you to reflash new SDLoader, it is much better comparing to prev version.

I updated SDLoader to v0.12. It is much faster now, takes about 20s to load and run 648kb binary. Also, fixed vdp reset, when running loaded binary. And now it tested and works with sdhc 16gb/fat32 card.

I recorded in action replay and tested version 0.121 and it is working better.
M

And here is new version 0.124. I did some optimizations, but speed increase is not so noticeable, so you may stay with 0.121.

Some calculations, if someone is interested.
In v0.124, for shift in/shift out one byte code routine, i reduced total instructions count to 175 (bit shift loop was unrolled to save few instructions count). According to what sh2 documentation states - basic instruction takes one cycle to execute. So, if Saturn's sh2 clocked at 26.87412246153846 Mhz, one cycle takes 37ns, and 175 instructions takes 6475ns. And, thereofe, for 1s it wll transfer 154440 bytes (almost cd-rom 1x speed). But it is only in theory. Because there is many overheads involving in process. And in actual result, 0.124 not really noticeable increased in speed with 0.121, where it get more instructions to shift 1 byte.

Thank you, tzmwx! Very nice way to avoid searching for spare controller connector, like it!
I added support for analog pad, and, also, cant resistate to tweak byte shifting a little, now total instructions count per 1 byte = 136. DIdnt tested it on real hw yet. But at least it works now on mednafen with "ss.input.port1 3dpad" option. Would be cool if you will try it on your config!

I make SDloader in batery Door.

Somebody released a ODE for NeoGeo CD last year