I'm going to dump Mega Drive -games soon with SEGA Mega-CD and Sega CD Transfer Suite. Version 1.0 will be enough for that purpose, but I'm interested in the possibility of dumping 40Mb carts, the Mega-CD BIOS and SMS cartridges. As we know, official version 1.1 supports only USA Sega-CD-consoles.

I extracted the USA-version 1.1 and downloaded ConvSCD v 1.10, as Mask of Destiny advised here. But when I use the utility, I'll get the following error:

"This does not appear to be a valid Sega/Mega CD image file."

My question is: is there any other tool that works for converting the Sega CD Transfer Suite 1.1 from USA to EUR?

Is there available already converted version of Sega CD Transfer Suite 1.1, of which I haven't found anywhere?

Sadly, it seems that the new version of the great tool is still unfinished, but if the popularity is weak, it is understandable.

If there is no way to convert USA-version 1.1 to EUR-version, I'll stick with 1.0. It's a good start anyway.

i've already used that tool (scdconv), it's working well, can you share a file you try to convert ?

No worries V, I got this.
Unsure of what the issue is as the conversion worked fine for me...

If it worked on your machine, then it's weird. But I burned the conversion you have made and it works great. Thanks!

It took me a while, because I had the classic fuse-problem with my Mega-CD, but now it's working fine again.

But there's another issue. I have followed the guide and launched dump.bin first on MCD and then dump.exe on PC, but I receive the error message : "DUMP caused an exception in module <unknown> at 0000:00000003... ". I have the same issue with recvtest.bin and sendtest.exe, too.

I use different computer for dumping (my Win98SE PC), because my main computer is lacking a LPT1-port. On the computer I'm trying to dump my games, I have done similar things with my LPT1-port with no problems. The guide doesn't mention any special setup needed.

Could the cable be the problem? I have attached the pictures of it opened. I'm not a professional, but the wiring looks fine except for the pins 20 - 25, for which I'm not sure. The guide says that pin 21 is for Ground, but "[pins 22-25 will also work]". This cable is premade, so if there's a mistake, it's not mine.

Do you have any ideas?

EDIT #1: It seems that the program crashes even if I haven't attached the cable to the PC. I'll check this out with another PC and see what happens.

EDIT #2: It turned out that I had borrowed my friend's old computer for no reason after all. I decided to try dumping with my second computer one more time. And, guess what? When I ran dump.exe from a CF memory card instead of running it from a hard drive, it didn't crash anymore!

The cable turned out to be working, too, and I started dumping my games. But there was still something strange: whenever I started dumping, dump.exe gave me a message: "Dumping 36 Megabits... " for every single game with different sizes. When the dumping had ended from the Mega-CD's side, dump.exe was frozen to a certain percentage, and it had to be quit manually.

I had my suspects, and I moved the games to my primary PC. They didn't work, and Kega Fusion gave me an error message: "WARNING: Checksum Incorrect!" I fixed their checksums with ESE FixCheckSum (Yeah, Sega-Tool is a good one, too.) but they still didn't work.

Then I opened the files and I got it. The files were just: "DDDDDDDDDDDDDDDD... ". I began to suspect that it had something to do with LPT1-port. Strangely, things had worked fine on a similar project before. Then I browsed the Internet, and someone had recommended using "EPP" as parallel port mode. I had only two options: "ECP" (current) and "Std. bidirectional". I chose the latter and hoped for the best.

So I started dumping again, and everything worked just fine! "Auto"-option worked for all of my games and checksums turned out to be correct, too. 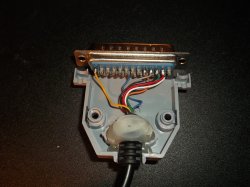 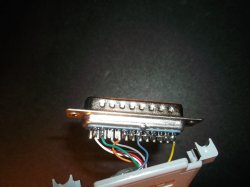 For those who have bought third party AV-cable for their 32X-consoles, there's a guide telling which pins must be cut in order to make those cables safe and preventing power down issues. I made also a little picture to show those pins: