Status
Not open for further replies.

the dvd gamecube is amazing! it looks great, i hope it comes to the states,or if one release a mod for the region check it out and what it can do
http://cube.ign.com/news/39315.html
its way better than the ps2 dvd player
M

<span style='font-size:9pt;line-height:100%'>Matsushita announced today that it would release its GameCube / DVD-player hybrid, called "Q", on December 19 in Japan. The system will retail for <span style='color:yellow'>approximately 39,800 yen ($328 US).</span>

The company also revealed that <span style='color:yellow'>buyers could pre-order the system beginning midnight October 21</span>. The pre-order bundle includes the system itself, a remote control and audio/video cables. There is also the option to pick up a copy of Super Smash Bros. Melee with the purchase.

The Q system can play GameCube software and DVDs, but it can also play DVD-Rs, VCDs, CD-Rs, CD-RWs and regular music CDs, Matsushita said. It <span style='color:yellow'>does not support progressive scan play</span>, but it does feature Dolby Digital 5.1 options. 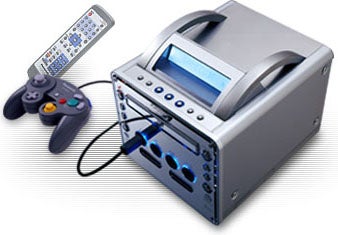 Those interested in importing the GameCube / DVD-player should be aware that it will not play US region movies or US released GameCube software.
</span>
Click to expand...

That thing looks huge. They should have a picture of it with the original GameCube to show how big it is.

The price is approximately equal to that of an XBox plus the DVD remote (<span style='font-size:8pt;line-height:100%'>neglecting shipping costs, of course</span>), however not having progressive scan play sucks though.

I wonder if anyone has [url=http://www.dvdgame.jp/]pre-ordered it already...

Yea, it does look big, but it also looks very interesting and futuristic. Also, and I know im probably going to sound like a moron when I say this but, what exactly is progressive scan? I think I know what it is but im not completly sure.
N

does ps2 have progressive scan play?, and beside
beggers can't be choosers, its cool it can play DVD-Rs, VCDs, CD-Rs, CD-RWs and regular music CDs.And consider nintendo would never bring something like this out by themselves.
M

If I was to get a GameCube, it would be this one, and not the purple one without a DVD. But, you can always get a X Box for the same price, but it looks better. <font size="1"> Oh boy, im going to be hated </font> Anyways, it looks cool, and I want it, but you know hoe it is
C

The Q most likely will not be released outside of Japan. And considering the GC supports progressive scan, I have no idea why Matsushita would not include that option, very stupid.

Progressive scan means that the picture is drawn left to right, top to bottom all at once like a computer monitor. Instead of the typical way of a TV, which is to draw even lines of the image, then draw odd lines (or the other way around). Haven't seen a TV like that in person, but it's suppose to create a clearer picture. Might be buying one though in a few months so the GC gets the kind of TV it deserves.

Well, looks like it has been confirmed that the Q is coming to japan only:

Those lousy japanese, they get everything.
E

What a bunch of bullshit. Let's break this down a bit:

Where is the evidence for this "simply" being a device for the Japanese market again? That guy's asking to get fired if that's the best explanation he can come up with...

I wouldn't be surprised if Nintendo had something to do with this, though; it could be part of Yamauchi's Master Plan (whatever that might be ).
Click to expand...

Well, I wouldn't be surprised if DVD players have caught on more in the US then Japan, it seems that way at least. A lot of people in the US already have DVD players, and they have really come down in price. Just yesterday in the newspaper ads, I saw a player for only $80. It probably sucks, but if you got that and a GC, you would save money over buying the Q. And I'm sure the DVD player in the Q isn't that great either.

Personaly, I don't realy care about dvd abilities in a console, I just thought it would of been a nice show piece, looks like one of those extra gaming rigs that will be lost in the tides of time. a year or so from know, it will be like the 64dd: released in japan only, and then forgotten even their.

Well whenever they (lik sang) get around modding it for pal i'll get one ... until then... no Q for me!
S

I dont see any reason to get a Q in the US, when you can get a GCN, and a good APEX dvd player for cheaper than a Q, and probably better features. The only reason i could see is if you wanted pirated games, which could probably be easier to do with the support of full sized disks.

NOTE: I dont want pirated games, and thus, i dont want a Q. Dont ban me for mentioning it =)

Status
Not open for further replies.