Gear Supporter
Someone on the Discord brought up @Voxel 's remake of Sonic Xtreme. I know the rules say you can't submit something for someone else. If he doesn't submit it himself I also don't want Dr Mr Nova stuck with figuring out how to award someone who gets judged highly based on something they made but did not submit (ergo, no contact with Voxel). I generally feel like the judges should try to "Honorable Mention" it though.
Edit: someone got in touch with him, so he submitted it, I guess. Good! Glad its here.
Last edited: Dec 29, 2022

He submitted it, no worries.

OK, so I've gotta tell the tale of how I turned this screen in the Stellar Assault SS demo from Japanese into English because it was a pain and I need to get it off my chest

I started by taking a screenshot of this screen and opening it in MS Paint, typing some English over it, painstakingly dividing it into tiles matching up with the original file's tiles, extracting with CDMage the BG file that makes up this screen, then copying and pasting by hand each tile individually from Paint to CrystalTile.

I found that the game draws a pair of tiles next to each other, then draws the next two tiles *below them* to form a square, then goes back up two spots and to the right two spots to draw the next tiles. So that's why I couldn't just copy and paste the whole image at once or even an entire line at once into CrystalTile — I had to do it tile by tile because the game displays them differently than how they're stored. LOVE IT

The pain I put myself through:

After that I found that the game reused the first blank tile over and over, including in a spot where the bottom of the C in COMBAT would go because it's a blank space under the horizontal line character in the original Japanese. 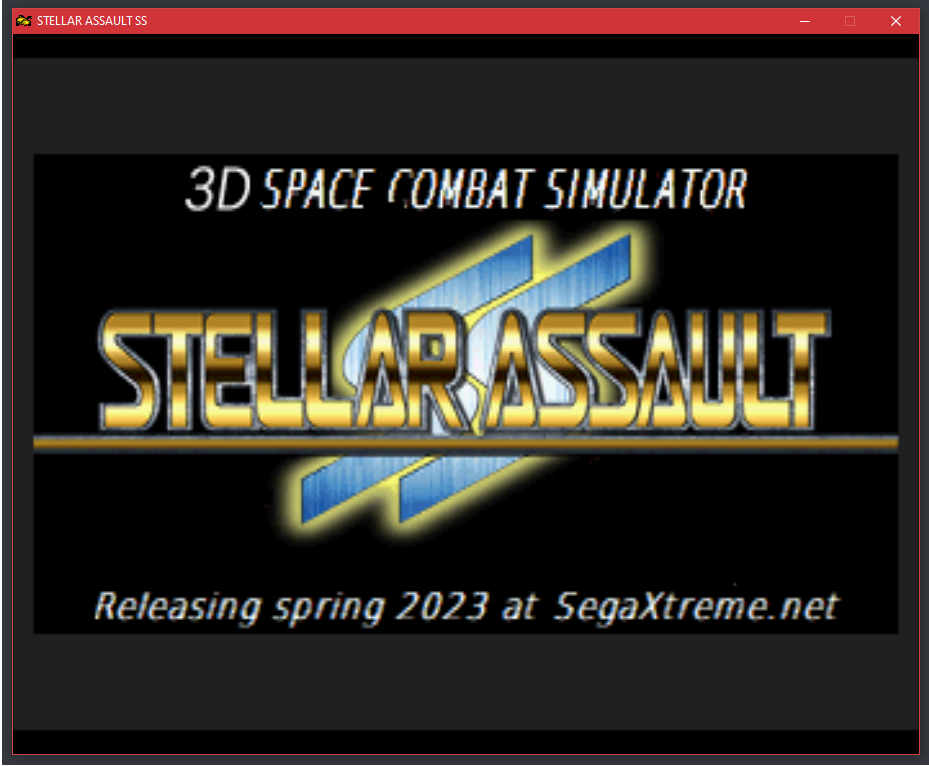 Looks like incomplete garbage, so I didn't want to just let it be like that. And it would be a bunch of work to type in a smaller font and re-copy-and-paste each tile one by one back in there.

Oh, and here's an illustration of how the developers reused the first four tiles for all the blank space on this screen — I drew some lines on them in CrystalTile, then booted up the game: 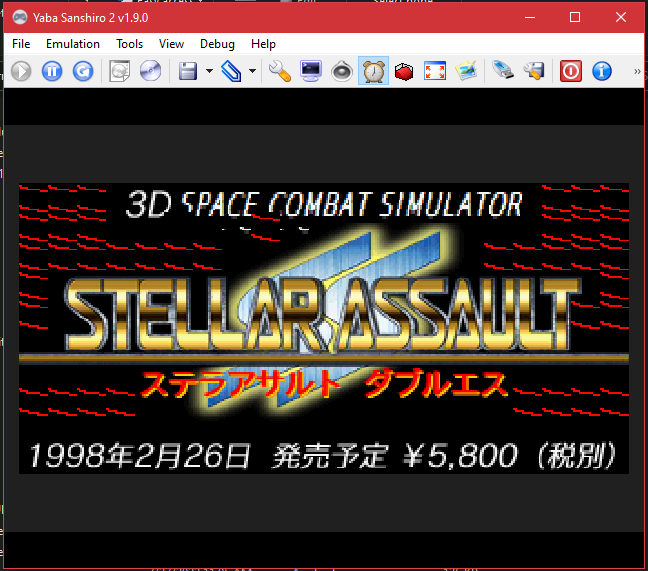 So I decided that I had to put that "bottom of the C/edge of the bottom of the E" tile in CrystalTile in a space that I wasn't using.

The "Releasing spring 2023" line is a little shorter than the original Japanese, so I tried putting the tile in the last spots of that line. Then I found the tilemap in the BG file and found which tilemap address corresponded to the one that was a blank space (through a lot of trial and error — putting a copy of a tile from the big STELLAR ASSAULT logo into random spots and getting closer and closer to where I wanted to be). Then I tried putting in there the address corresponding to the last couple tiles of the map, where I put the bottom of C/E tile, but for some reason it refused to show it in-game — it was just blank.

So I went with plan B. Since I used a smaller font for the "Releasing spring 2023" line than the original Japanese, I had some unused (but unique in the tilemap) space above that whole line. So I picked one, put the bottom of C/E tile in there, figured out the tilemap address of that tile, plugged that address in place of the blank space, then put a blank space's address in the tilemap where I drew the bottom of C/E tile. VOILA SO EASY

Oh and BTW, I found that each tile in that graphic does not have a corresponding address in the tilemap. Each tilemap address is a four-tile chunk, and they're not even drawn sequentially based on how the tiles look in CrystalTile, as I explained above. So that was an extra wrinkle to wrap my brain around.

All in all, five hours of work for a screen few people will see* but hey, at least I learned a new and interesting way that developers tortured graphics out of the Saturn.


*You have to sit at the title screen without pressing start, waiting about 15 seconds, at which point a gameplay demo will load up. Hit the start button to end that demo and the game will display the screen above. Oh, and the screen originally said in Japanese "3D shooting game" up top, "Stellar Assault Double S" in red in the middle, and "Scheduled to be released Feb. 26, 1998, for 5,800 yen (excluding tax)" at the bottom.
Last edited: Jan 3, 2023

Super impressed by your entries. Are you planning on sharing source code as well? Also glad you used the .BUP format, keeps everything easier for end users if us dev use compatible formats. Woot.

Yeah, that QR save tool should prove to be really useful, especially for testing translation patches on real hardware.

Patron Supporter
I can see the QR2 being most useful built right into Pseudo Kai. Those folks have the hardest time getting their test saves out. It is also practical to be built into other ODE menus as well.

Such a brilliant idea, this is why I love this competition so much, so much outside of the box thinking.

Really impressed by this year's submissions. Judging is going to be difficult. Still working on the contest video I do every year for this, so you can expect all the submissions to get coverage there. The progress with ongoing projects is excellent, and a lot of the new projects have been a joy to play, especially magic. Great work all around. Super happy to be a part of the judging panel and am having a great time making this contest video.

@SuperReye Just played Sky Blaster. This is awesome. Had a real blast playing, cant wait to see the next iteration. Thank you

Damn it! I left magic out of my vid

Tails of Saturn said:
Damn it! I left magic out of my vid
Click to expand...

not good i noticed that, it deserves its own video, and if you're lucky with looping

vbt said:
not good i noticed that, it deserves its own video, and if you're lucky with looping
Click to expand...

vbt said:
not good i noticed that, it deserves its own video, and if you're lucky with looping
Click to expand...

Tails of Saturn said:
Is this enough?

Wonderful ! Over 2 hours of happiness
Big thanks @Tails of Saturn !!!!

Someone should convert that video to CD+G so all the Saturn users without mod-chips\ODEs can watch the video.
You must log in or register to reply here.