I originally had this thread over at romhacking dot net but every post took a day or two to go up since it always needed moderator approval :/

I started poking around the 3 bin files on the disc and found the chunks of Japanese text.

I'm using this JIS Table: https://mattsmessyroom.com/uploads/sjis.tbl so big shout out to Matt and his messy room.

I also set encoding in the hexeditor to Shift-JIS and that lets me see the correct characters in the editor. 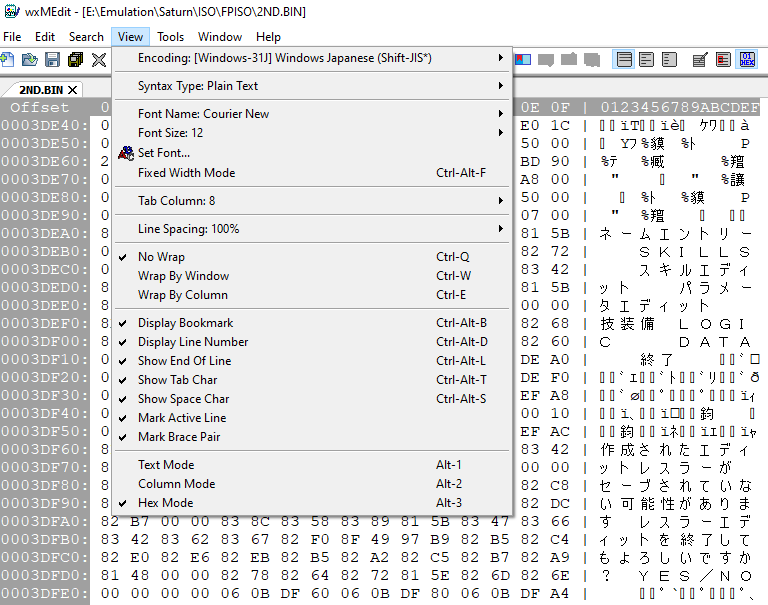 And with that we have the basic wrestler edit menu in ENGLISH! 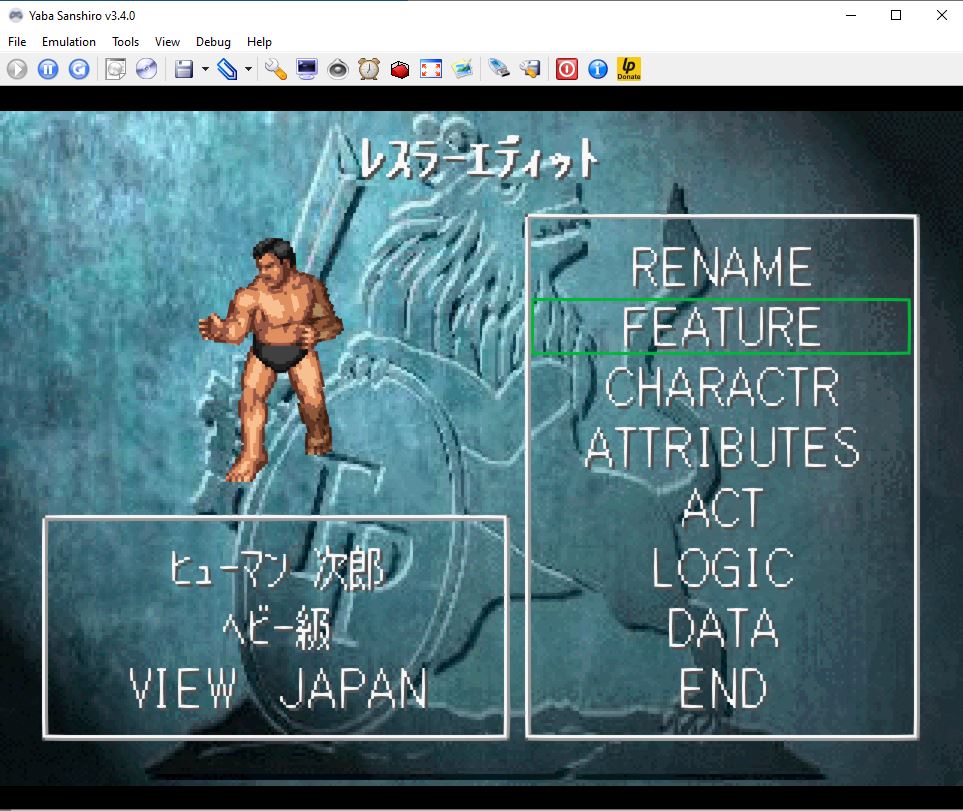 There are some *HUGE* limitations, so much more info in in the Japanese, so I had to make some sacrifices.

For example, where that screenshot says "ACT" literally translates into "skill equipment / skills equipped" and localized is closer to meaning "Move set" but I only get 3 letters since I couldn't do it with the 2bit values in the JIS table (the lines would just be blank) I had MVS there , short for "moves" but Pinball Jim came up with "Act" , short for "actions" so badda bing badda boom, its in.

So for now I'm injecting the altered bin files into the ISO with CDMage and it seems to work just peachy in the emulator "Yaba Sanshiro" v3.4.0 ; to note I did have to emulate BIOS to get the game to stop crashing at match loads but it still crashes after the match ends. I make look into another emulator when it comes time to translate the story mode screens that happen after you win the 6 championships.


I have all the feature choices (wrestling outfit) done, all the main mode choise screens done ,and Ive started on the moves since that should take the most time and I wanna start chipping away at it. 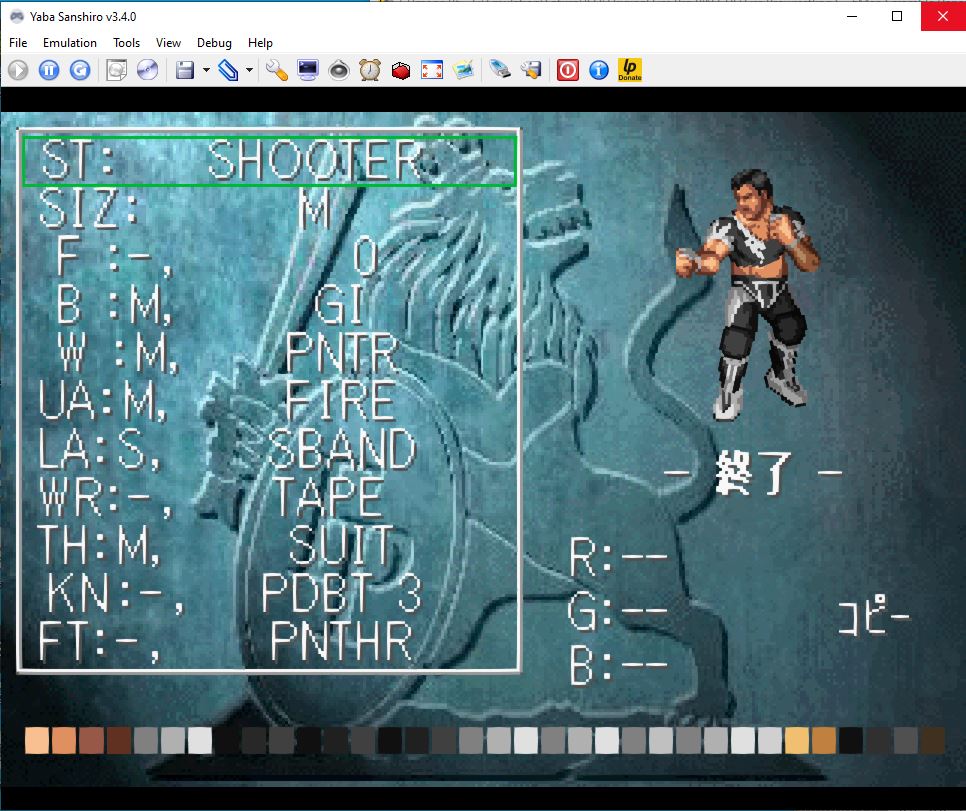 I havent found the EXIT characters yet or the clip board color character either. Im sure as I get more done they'll be less to root through

The localization of this is proving to be a little challenging , for example one of the taunts is "両手拡げ叫び" which pretty much means "scream with both hands" but I only get 6 letters to work with. I used SCREAM for this, but I'm hoping there aren't tooooooooo many screaming taunts. Lots of abbreviations had to be used too. A lot is pretty ambiguous like "両手振り" meaning "both hands gesture" so Im just trying to put something that makes sense like "RAYS"...... get it? oh well can be changed later if I want

Big thanks to Slinga-homebrew for his save game loader (that works in Yaba Sanshiro too!)
Last edited: Thursday at 5:46 AM

Any mods around? Can you move this thread to the Saturn Dev section?

I went to delete a single pic and I guess I deleted the whole post, my bad. Here we go again......


Into google translate and got this:
Many groups are scattered,
This chaotic time
What do wrestlers want,
Why wander...

To find the answer
Have to keep fighting
And after finishing the battle,
You are the savior who saves this era,
Will be a Messiah...

So I did the best I could to paraphrase it: 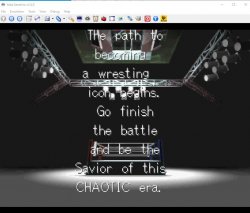 I have all the various mode main screens done, but I may tweak them a little: 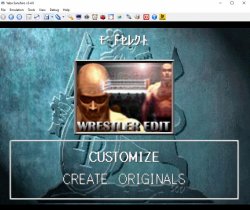 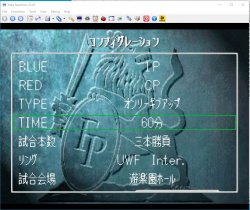 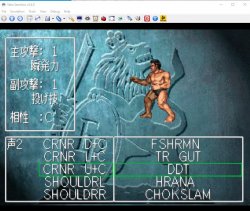 And Im trying to sort out all the top level menus too, like Victory Road 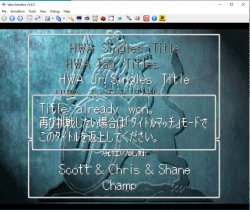 Continuing on with "Victory Road" mode, I worked on the screen for selecting a championship that is already done (started in the last pic above)

再び挑戦したい場合は「タイトルマッチ」モードで easily and directly means "If you want to try again, use "Title Match" mode "
このタイトルを返上してください translates to "please return this title"

So I used that space to say: Use "Title Match" to try again or delete. 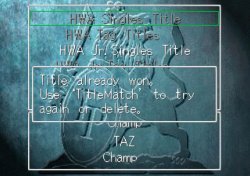 That made the most sense to me.


On the actual title clear screen you get this pop up: 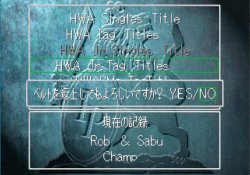 ベルトを返上してもよろしいですか / Are you sure you want to give up your belt?

So changed it to "Return the belt?" 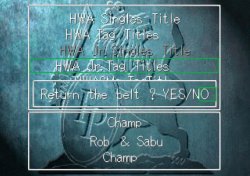 Hey, I love Fire Pro and am so excited to see this is being worked on! I have 2 modded Saturn consoles, one NTSC with Mode ODE and one Pal console with 50/60hz/modchip. Would be happy to test images on real hardware if you need a tester

I'll probably put the WIP files up for download soon enough, there's just some more menu stuff to sort out first. I dont plan on making people wait while I do all the moves; and Im always ready for some feedback and suggestions
You must log in or register to reply here.
Share:
Facebook Twitter Reddit Pinterest Tumblr WhatsApp Email Link
Top